Lady Antebellum Brings The Own The Night Tour To Murray, KY - December 11, 2011 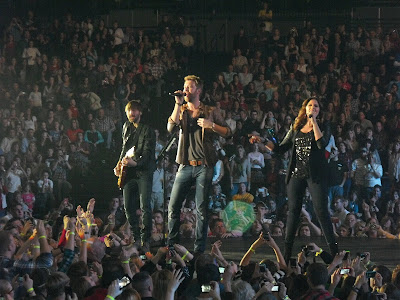 Lady Antebellum brought their Own The Night tour to Murray, Kentucky's CFSB Center on Sunday night. To say this was a great show would be an understatement. I am definitely a Lady A fan and was really looking forward to seeing them. I did not make it in time for the opening acts so I can't comment on that portion of the show but I was happy to see them later included in the Lady A portion of the show. If you are not wanting spoilers on the show, you might want to stop reading this. This tour is far from over so I don't want to ruin any surprises for anyone not wanting them. The CFSB Center looked great for the show and I want to give thanks to the great staff and crew there including the one working at the box office who helped me find a great seat for the show. The whole setup was just impressive as can be. Before the show, there was a lot of fun to be had with the dance party going on. One of the better ways that I've seen for people to be entertained while waiting for the show to get going again. Cameras were out in full force with the best dancers being put up on the big screen. People of all ages were having fun with this and the music sounded awesome in the building. Just a lot of fun! The show opened big with a great intro video that looked impressive on those three screens up there. The crowd was fired up immediately as the show opened with "We Owned The Night" as they came up underneath the stage. Just an awesome visual to start the show. Going from that into "We're All Stars Tonight" was the perfect start for me. The crowd was big time into it and singing along with the songs. I think they played every favorite song of mine. The performance of "Hello World" was so good. We had the really great laid back slow part of it and then just blasted into the big finish of it. It looked and sounded amazing. Lady A, their band, Josh Kelley, and Eden's Edge all got to jam together out on the ramp toward the end of the show as they also included some Christmas music in that as well. Funny moment with a fan's Christmas decorations being borrowed for part of the performance. One really fun surprise of the show was the cover of Aerosmith's "Sweet Emotion". I heard the guitar start and was excited to hear how it sounded. Great cover of it. "Run To You" really looked like a fan tribute right down to the meet and greet pictures on the screen and then Charles Kelley roaming around in the crowd. The ending of the show was just perfect. Now, if you're a fan, you know that there was one song that had yet to be performed and that was "Need You Now". They come back for an encore with the lights out. The piano starts with those addictive notes and we get the big finish of that song. It sent the crowd home very happy.
One thing that I really love is just how much they do for their fans on this tour with being interactive and all. They allow fans to vote at the shows picking between four different songs on what they want to be hear performed. Also, it appears that they are uploading pictures from every tour stop on to their Facebook page. That is something that I think is really cool. It gives fans another opportunity to grab some pictures of their concert tour stop. I can't think of anyone else that does that off the top of my head.
I know I've used the word "great" five million times in this recap but that is the best way to describe it. It was a great show all around. If you get the opportunity to see a Lady Antebellum show, go see it. You will not be disappointed. One of the best concerts that I've ever seen.
at December 13, 2011