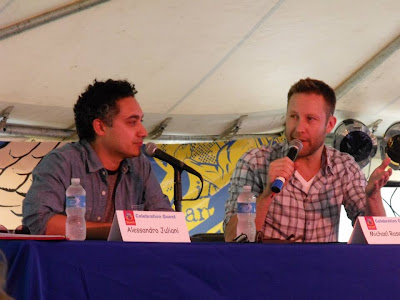 The 2013 Superman Celebration this year featured a couple of returns and lots of various guests from the genre of Superman.  For me, the main event was of course the Smallville Q&A which featured Michael Rosenbaum (Lex Luthor - Smallville), and Alessandro Juliani (Dr. Emil Hamilton - Smallville).  To say that this was a very entertaining Q&A would be an understatement.  What might have been the most random and fun Q&A for a Celebration last year with Cassidy Freeman and John Glover was likely topped this year by this duo of Rosenbaum and Juliani.  They were so much fun and just had a lot of fun being a part of it.  The two of them were so gracious all weekend talking and meeting with fans.  Having a great time and they were a great addition to this year's Superman Celebration.  So, what happened at the Q&A?  Well, there really is no way to recap all of it and I'd be doing it a disservice if I did.  I'm going to hit a few of the questions asked at the Q&A and tell some stories of the happenings along the way. 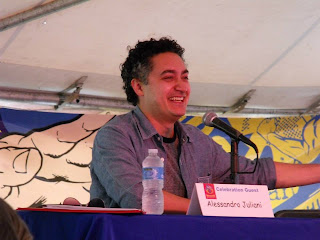 Question: What was it like joining into Smallville?  Were you welcomed in greatly?

Juliani: They were a finely tuned machine.  I came in during season eight.  It was a great bunch.  A great crew.  I was welcomed into the fold.  They were really happy that I could do all the scientific talk for them.  Allison Mack was very relieved cause I could do all the tech talk now and she could have real storylines. (laughs).

What was it like going back to the show?
Rosenbaum: It was pretty fantastic.  I did seven years.  I wanted to go off and do other things and have fun.  I directed my first movie (titled Old Days).   Everyone needs to see it.  All my Smallville/Superman fans.  Morena Baccarin of V and Homeland is in it.  I came back.  The fans demanded it.  I figured seven years was enough.  I knew I had to go back.  I said I can't shave my head again.  I knew they weren't expecting it and I called them a week before and I go, hey, it's Michael.  I've got next Friday open.  I'm not going to shave my head.  Why would I do that for one episode to have six months of hair growing back?  You've got me on a Friday.  A whole 24 hour day.  Let's do it.  The next thing you know they're frantically writing, fitting me for a bald cap.  I came back.  It was the best thing that I could have done.  I'm glad I did. It was the way to end the series.  Why didn't they do a Smallville movie?  I still think they should.

Juliani was asked about his music being involved in Smallville and also Battlestar Gallactica.

Juliani: Music is actually what I am trained to do.  I trained as an opera singer many years ago. Getting to sing in that one Smallville episode was a hoot with Cassidy.

How does it feel to be the torchbearer of sorts moving from one Superman franchise to the other?
Juliani: Let’s be honest.  This is how the conversation went when my agent called and told me about Man of Steel.  My agent called and said so they want you to be in the new Man of Steel but your role, it’s only four or five days, and your role is kind of like it was in Battlestar.  I was like, I’m in, whatever, whatever.  Just tell me where to show up.  I’d worked with Zack before on Watchmen so I knew it was going to be so much fun and it was.  The difference was that in Man Of Steel that I provide vital exposition in tech talk for the main actors in the film.  Oh no, wait, that’s what I did in Smallville too.
A fan brought up the very funny story of John Glover from last year talking about some of the stories that he told about Rosenbaum at last year's Celebration. He told the story about how the two of them used to always mess with one another as John would always touch him on the shoulder or face during their scenes together.  It later became a competition of who could touch the other first including them touching shoulder to shoulder immediately on a take and breaking into laughter.  I have heard the stories of this happening on the DVD sets and it is hilarious.  Rosenbaum reenacted it during this Q&A with a fan.

A fan all the way from London asked what their fondest memory from Smallville was?
Juliani: When I got to have an Elvis costume tailored for my body.  The white jumpsuit with the rhinestones.  That's got to the be the highlight....maybe of my life.  Not just of the show.  Without a doubt.
Did you get to keep the suit?
Juliani: No
Rosenbaum: You have to steal them.  I got the white suit.  The president's suit.
Juliani: I stole my fake leg from Battlestar Gallactica. 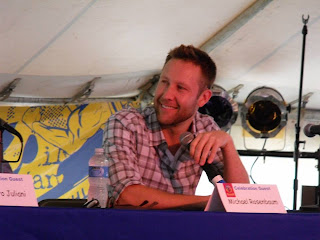 Rosenbaum: Fondest memory?  This is a tough one.  When I left season seven, I didn't really get emotional.  It didn't really hit me.  It was bittersweet.  It was nice.  But when I went back for the series finale and I realize that the show is going to be over after this next episode.  And I was fine.  I got the whole cast and crew sushi.  At the end, I went to get the bald cap off and my makeup artist who has been there since season one and she took it off and cleaned my head up. I walked out and I gave her a hug and as I walked out and I just go, oh no, and I don't know why.  I'm not kidding.  I just started crying.  And she goes, 'oh my god, are you crying?' and I'm saying 'I think there is something coming out of my eyes'.  And turned around and hugged her and just cried it out.  That was a great moment.  So, now you know Lex Luthor has a soft side. 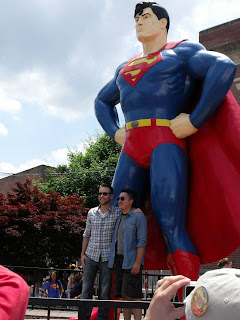 There were a lot of other fun moments including the finale with Rosenbaum telling the crowd that if this last question for him was bad to boo him.  LOL.  That got a lot of laughs.  I should also point out that Rosenbaum was working the crowd a bunch roaming around with a wireless mic which has never been done at a Q&A there.  He was having a blast.  He pointed out one kid that was making a noise with something that was just blaring in his ears.  It turned out to be the Q&A host, Steven Kirk's son, which drew a lot of laughter when he said it was his son.  Rosenbaum got a huge laugh out of the odds of this happening.  Awesome singing out of Juliani as he was asked to break into song.  He has an awesome voice!  Rosenbaum teased about wanting to do a Smallville movie saying get a Kickstarter campaign going and make it happen.  They were asked about the Smallville prom which was happening later in the night.  If fans were at the prom, they got a special treat as Rosenbaum and Juliani crashed the Smallville prom giving fans that were there a memory.  I have seen people's pictures from it happening and it looks hilarious.  Just goes to show how much fun that they were having to go and do that.  The two posed in front of the Superman statue and had fun with the fans.  It was just a great day with the two of them and they could not have been nicer to the fans.  A crowd favorite duo for sure.  Thanks to both of those guys for coming out and being a part of the Celebration and having fun with all the fans!  It was a great time!
at June 17, 2013