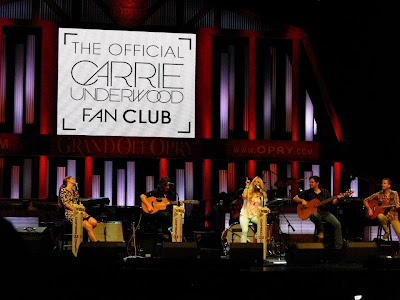 Nashville is a busy place already this week as the annual CMA Fest takes over the city.  The Grand Ole Opry was the host for a lot of Carrie Underwood fans who were in town for her annual Fan Club Party and also to see her play the Opry stage that night.  I attended the Fan Club Party and it was a great time as always.  Just thought I'd give some thoughts on it and kind of review it as well.  Fun to walk into the Opry and here her new album playing getting us set for the show.  Fans clapping along to "Good Girl" as it played was a sure sign that this was going to be a fun crowd as always.  The show started just after 10am and was hosted by CMT's Evan Farmer.  As he gave the big intro for Carrie, all of us on that end of the Opry could see her having fun backstage with the intro.  She opened up the show singing "Do You Think About Me?" and thanking all the fans for being there for the party for another year.  "Temporary Home" sounded amazing as always and just brought this amazing peace into the Opry listening to this awesome song.  Carrie belted an awesome performance of "Good Girl" which was my first time to hear actually live so I was excited for it.  Before singing it, she announced that it was now the number one song in America and thanked everyone for voting, calling, Facebooking, posting on Twitter, and whatever else.  "One Way Ticket" was a big favorite in the Opry with the fans getting involved with the whistling and hand waving.  Fun atmosphere for that song and Carrie loved it too.  So apparently I am not the only one that is a big fan of the song "Two Black Cadillacs".  When she sang the first words of it, the Opry came to a roar of approval.  She let out a big smile at it too.  I love that song and it sounded great live.  Speaking of another song I really like on her new album, that gets us to "Blown Away".  Before singing it, she said that they were going to experiment an acoustic version of it with us and see how it goes and what the feedback was on it.  After finishing it, it got a big ovation from the crowd.  Yeah, I think that will work just fine!  LOL.  "Jesus Take The Wheel" is always a big crowd pleaser and one that you always wait for.  Carrie finished the music set of the show off with "Before He Cheats" with the crowd singing along near the end. 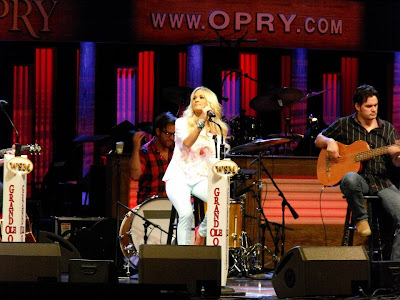 The set list was this since I know people will be wondering.
Do You Think About Me?
Nobody Ever Told You
Temporary Home
Good Girl
Two Black Cadillacs
Wine After Whiskey
Good In Goodbye
One Way Ticket
Jesus Take The Wheel
Blown Away
Before He Cheats 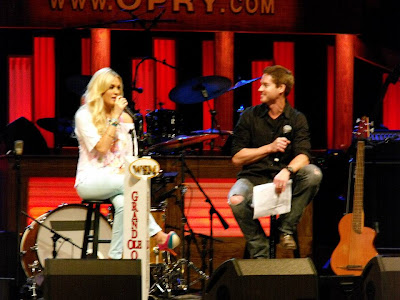 Evan Farmer returned to the stage for a Q&A session.  It should be pointed out that Carrie talked in between songs quite a bit too interacting with fans which was a lot of fun.  One discussion on hearing about someone's phobias about puppies that she had seen on TV.  It cracked me up with how she told the story.  The Q&A had questions ranging from her fear of pyro due to the Idol finale, her father/daughter wedding dance song of choice, and which could do the other better whether Mike would be a better singer or Carrie would be a better hockey player?  Carrie recorded a happy birthday message via flip cam video.  Her idea was to get everyone to sing happy birthday and then send it to him.  It went really well as you can see here as she has posted the clip on Twitter. 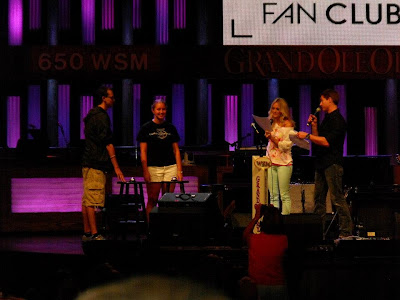 We also got treated to a sneak peek of the new "Blown Away" music video which looks amazing just off of a few clips.  Wow, you could hear the buzz in the Opry over it.  Definitely looked like something out of the movie Twister.  I can't wait to see this thing.  Afterwards, the trivia game got underway.  Fans competing for some big prizes.  These questions were hard.  Either that or I need to brush up on my Carrie trivia.  It was fun. Carrie signed some autographs near the stage after the party concluded.  Everyone upon leaving the Opry got an autographed fan club party poster and a commemorative fan club party t-shirt.  Lots of new "Blown Away" tour merchandise available outside the Opry as well.  I had been wanting to see what the new tour apparel was going to look like and it gets a thumbs up from me. 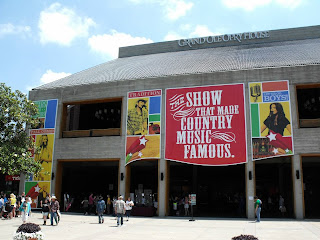 It was a lot of fun as it always is.  The Opry is such an excellent host for this thing every year.  Such a great and relaxing atmosphere in there.  The weather was perfect this year making the day even more enjoyable.  That is it for today.  Just wanted to post a recap of the party in Nashville.  Have a great day!  Take care and God bless!
at June 06, 2012