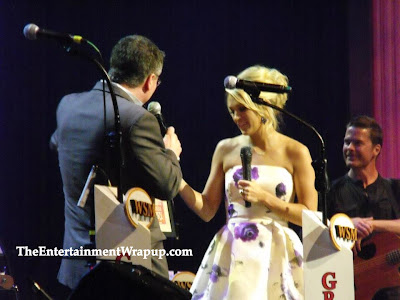 CMA Week was in full gear on Friday night with plenty of options of places to go see live music.  You could of course be over at LP Field but I was at my place of where I wanted to be and that was at the Grand Ole Opry for Carrie Underwood's five year anniversary of being inducted as a member of the Grand Ole Opry.  Two shows with the 7:00 show being sold out.  I got to attend both shows with being in the second row for the 9:30 show.  A great lineup for both shows which included Carrie, Josh Turner, Lauren Alaina, Bill Anderson, Casey James, Charley Pride, and many more.  Carrie Underwood had the spotlight for the night with her five year Opry anniversary.  She made all of us fans very happy with her performances on both shows.  Before her performance, the Opry showed us a video looking back on her journey at the Opry.  The video just made me smile as we all got to look back on her years there and seeing her career just get bigger and bigger.  The video showed the night that she was asked to become a member of the Opry by Randy Travis and then also the night that she was inducted by Garth Brooks.  The video was so great and thankfully the Opry has posted it online to see.  You can check it out here.

Carrie was presented on stage with a speech and plaque by vice president and general manager of the Grand Ole Opry, Pete Fisher.  Here was his words to Carrie:  "As we were watching that video, we heard her promise that it would be a decision that we would not regret.  When I think of Carrie Underwood, the word regret doesn't even enter my mind.  You have done an extraordinary job as an Opry member.  The Opry has almost an 88 year history and I think folks will look back with very special favor on the years that Carrie Underwood contributed to the Opry.  So, on behalf of the staff and all of the members of the Grand Ole Opry, we want to thank you.  You have far surpassed all of our expectations when we brought you into the family.  We know it's going to continue into the future.  You are not only so good for country music but you are so good for the Grand Ole Opry and you are so good for America and we appreciate all that you do.  You're the All American Girl, aren't you?"  Carrie was then presented with a plaque showing the number five on it with her picture and the date of June 7, 2013 on it to commemorate the night. 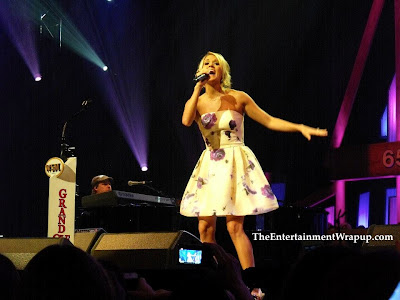 For the 7:00 show, her set list opened big with "Cowboy Casanova", followed by "Two Black Cadillacs",  "Jesus Take The Wheel", "All American Girl", and then closed with "Blown Away".  My favorite performance of the night may have been Blown Away.  She just absolutely brought it all night and that sounded great live especially with it being the closer for the 7:00 show.  For 9:30, Carrie opened with "Good Girl" followed by "Wasted", "I Told You So", "Undo It", and closed it with the always crowd pleaser, "Before He Cheats".  Carrie spoke on her five year anniversary during the show saying "It is so hard to believe it has been five years but what an amazing five years it has been.  Just watching that video back, I was getting a little teary eyed thinking about how I felt when all that was happening.  I still feel that blessed and that honored to be on this stage so thank you guys so much for a wonderful five years." Carrie has blessed all of us fans for these five great years at the Opry and she has actually been my introduction to the Grand Ole Opry.  I had never been there until I went to see her there.  Now, Carrie and the Opry has just become one for me.  It was a special night to be a part of and all of us were incredibly thankful to be there to cheer her on.  Here is a video that the Opry has posted of "Two Black Cadillacs" from Friday night. 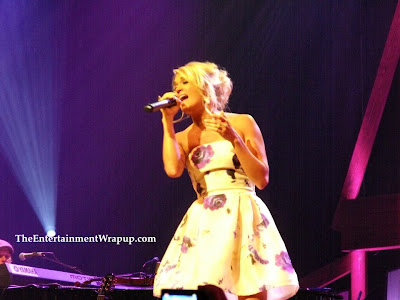 The Opry show kicked off with Lauren Alaina getting to do a couple of songs which included her new single and also an awesome cover of "I Hope You Dance".  During the second show, Bill Anderson came out and talked to Lauren about how she had just graduated from high school.  He asked her how she managed to keep up her school work while also managing a busy schedule.  She laughed in a "wasn't easy" kind of reaction while also adding she graduated with all A's saying "I may be blond but I do have some brains".  LOL.  Loved it.  She talked in the first show about how far she had come here at the Opry with Carrie introducing her to the Opry crowd a couple of years ago and now she is on the same lineup as her performing.  I was already thinking about that very thing as I was in attendance at the Opry that night that Carrie brought out Lauren and Scotty McCreery.  Josh Turner was a lot of fun as well and the ladies love that guy.  He went through "Long Black Train", and "Why Don't We Just Dance", and more.  His performance was a lot of fun on both shows. Bill Anderson was his usual crowd favorite entertaining the crowd with music and his fun personality too.  This wasn't all of it though as there were many other great performances through the night including Charley Pride, The Whites, Casey James, Mel Tillis, Bobby Osbourne & The Rocky Top X-Press, Jeannie Seely, Jan Howard, and Jim Ed Brown.

In attendance and seen by many fans including myself was Two Story Road.  They were there to support Carrie and see the show.  They had been busy themselves earlier in the day with their first ever fan club party.  I got to meet Two Story Road and they could not have been nicer.  I just wish them all kinds of success and know that great things are ahead for them.

A really fun night at the Opry as always.  I actually took in three Opry shows during CMA Fest including the two Friday night and then also the Tuesday Night Opry.  Fun at all three and it is such a great and relaxing atmosphere there.  Looking forward to being there again soon.
at June 13, 2013