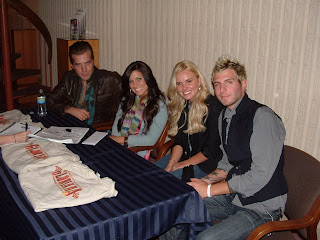 This is an album that I have been waiting many months for and it did not disappoint!! Gloriana was formed with the idea of having four lead singers together to form a group. The group consists of Tom Gossin, Rachel Reinert, Cheyenne Kimball, and Mike Gossin. They have such a great sound whether it is vocals or instrumental. Just such a fresh sound that will draw you in quickly. Their first single, “Wild At Heart”, has gotten a ton of airplay on the music channels. Their latest video for “The Way It Goes” just premiered about a month or so ago. The video features them on tour and is really well put together. One of the best edited music videos that I have seen in a long time. Even the visual of that video will draw you in and that is just besides the song drawing you in. I saw them in concert back in November and was immediately hooked. After watching them for ten minutes into their concert, I leaned over to my friends and said to them, “I’ve got a new favorite group”. I got to meet them after the show and they were great. A lot of albums will have you just listening to it once and then moving on to listen to something else. Not this album. I am still rotating through it listening to my favorite songs. I, of course, love the singles that have been released so far but I already have a ton of other favorites. The album kicks off with a fun fast moving song called “How Far Do You Wanna Go?” I have been hearing that song for a while on their website. After "The Way It Goes", “Lead Me On” is a great slow song that just brings the album down to a slower pace. I loved that song immediately. Other favorites are: “All the Things That Mean The Most”, “If You’re Leavin’”, “Over Me Now?”, and “You Said”. It really is great to see four such talented performers come together and join forces in a band. They have star power all over them and are going to be doing great things in the future. After I saw them in concert, I was thinking how that I couldn’t wait for their album to come out. It was worth every bit of the wait. I can’t recommend this album enough. For more info on Gloriana including buying the album, check out: http://www.gloriana.com If you aren’t very familiar with Gloriana, here is a link to their latest video “The Way It Goes”.