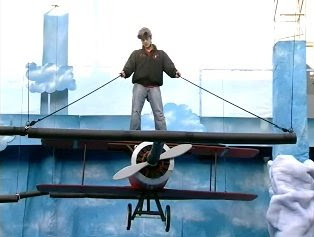 The final three is set on Big Brother 10. Not much of a surprise on who was evicted tonight based on watching the feeds. The veto was won by Memphis meaning that he had the power to evict whoever he wanted with Keesha or Jerry. He was on the block and he of course used the veto on himself. Keesha was vicious in her final speech to try and plead for her case to stay. She thanked Dan for being there for her the last couple of days and had nothing to say to Memphis. Memphis voted Keesha out making it a final three of Dan, Memphis, and Jerry. On the way out, Dan whispered something to Keesha. I was hoping to hear what he said to her and did hear it right at the time. Keesha confirmed later in her interview that Dan revealed that he took Michelle on the trip with him. That was no doubt a way to stir things up in the jury house. Dan talked right afterwards in the house about getting revenge for Keesha but he knew that she was going home. They're playing Jerry at this point obviously thinking that there is trouble between them. I have to say that Dan is playing one smart game so far but let's see what happens in the remaining days. The HOH competition began as the show went off the air as this will be part one of three parts to it as always. The houseguests are having to stand on top of an airplane swaying up and down.

SPOILER ALERT!! Here is what is happening on the live feeds as this competition goes on. I'll be updating as the night goes along.

8:15pm Update: The feeds came back around 8:10pm and Jerry was already out. Dan and Memphis still going at it. Not much talk going on among the three.

8:40pm Update: Dan and Memphis still hanging on. Big Brother has a wind machine that kicks up after a period of time and seems to be hitting them with water as well. Jerry is outside watching the competition. Dan keeps telling himself "nose on the plane" as he concentrates on where to look at to keep himself focused. This will be interesting to see who drops out between the two cause they're obviously taking each other to the end unless one of them turns on the other.

8:47pm Update: HOH is over. Memphis is down and Dan wins part one. Yeah, a very anti-climactic competition. You had to know that Jerry would be out early which I'm sure is why they took him to the final three. It would have been a lot more interesting if Keesha would have been in it with the three of them battling it out. I figured this would be a short HOH and it was. Yeah, not quite the marathon that Dick and Zach had last summer in BB8.

9:20pm Update: Dan and Memphis have not talked yet but it is clear that Memphis threw the HOH to Dan. Just waiting for them to have a conversation to hear what their mind set is on the events of the night but it's fairly obvious. Memphis and Jerry are eating in the kitchen. Dan is laying in Keesha's bed looking deep in thought.

9:30pm Update: Finally, they meet. Memphis just went into the room and Dan said that they can't be seen talking to each other until part two is over. Memphis then joked for Dan to get out of his room then. They're talking about whether Memphis can get Jerry to throw part two of the HOH to him. That seems to be the plan which they have already discussed previously.

10:15pm Update: Jerry gets called to the diary room. Time for Dan and Memphis to talk. LOL. Dan asked Memphis if he called him out too much after the show. Memphis said "maybe a little bit but not much". Memphis talked about flipping to decide who evicts Jerry.
Memphis asked Dan what he said to Keesha when she went out of the door. Dan told him that it was about Renny's vote and to "Finish it for me". They are still talking about not being in the same room together to continue to make Jerry think there is problems between them. They are definitely working this argument for all it is worth.
at September 09, 2008