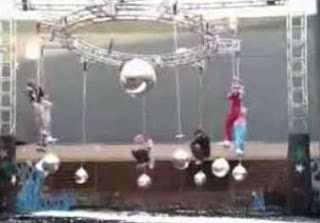 I'll be updating the happenings of the HOH competition as it goes along tonight. Tonight's Big Brother saw a house guest evicted and a house guest brought back. First, the episode itself saw a lot of stuff cut out of what happened after the veto ceremony. A LOT. I'll get into that tomorrow in the regular edition of the Wrap Up. As far as the live results of tonight's show, James was evicted from the house on a 5-1 vote. The results of the viewer voting was revealed where America got to choose which evicted house guest that they wanted to see return to the game. The picks were between Jacob, Jen, Parker, Alex, Amanda, and Allison. The viewers voted for Alex to get the chance to return while Parker finished second. However, there was another twist as the house got to pick whether to bring James back or to bring back the unknown previously evicted house guest that got the vote. The surprise house guest got three votes while the rest of the house voted for James to return. James returns to the Big Brother house. First thought was what a lame twist. All that voting and the one voted doesn't even get to return. Now instead of a game that would be switched up a bit, we've got the same game that we had last week. I'm sure tonight's HOH will be very intense especially with the house divided. Stay tuned on the happenings of the HOH competition as I'll be updating as I watch it play out on the live feeds.

8:15pm Update. Feeds just came back on. Adam and Josh are already out of the HOH. Lots of talking going on between James and Natalie. Kind of funny considering that Natalie voted to bring him back in. LOL.

8:30pm Update. Matt is out of the HOH. Still up in the air are James, Sharon, Chelsia, Sheila, and Natalie. Sharon and Natalie look strong up there so far.

8:45pm Update. Sheila is out of the HOH. She had been complaining for the last ten minutes that she was feeling sick to her stomach saying that she didn't eat enough before this competition. A few minutes ago the guys on the sideline were trying to figure out the votes and Matt seems to think that Natalie was one of the votes to bring back James. Natalie is probably going to take a ton of heat over that vote to bring back James.

9:30pm Update. Nothing has changed. It's still Sharon, Chelsia, James, and Natalie. Everybody seems to be doing fine. Big Brother is going to have to throw a twist in this thing soon cause they're going to be up there for a long time at this point.

10:15pm Update. We're about two and a half hours into the HOH competition. These four have been very strong up there. Sharon just dropped out. She said she couldn't hang in anymore. Down to three people. Natalie is immediately telling James and Chelsia that they aren't her target this week. James is saying that he doesn't care and is staying up anyway. She was also telling James earlier to not be mad at her saying that she did vote him back in. James replied that he wasn't thinking about being voted in but being voted out. James is definitely on a mission to win this thing. Ryan and Matt have been talking and definitely aren't happy with the votes to bring James back in.

11:00pm Update. Three hours into the HOH competition now. All three remain. Big Brother has just made the competition tougher letting them only stand now and they can't squat anymore. Matt and Ryan are hanging out talking to them.

11:35pm Update. The two of them are still going. James is looking really rough and Natalie looks solid. I don't know if there is any way that James can win. They keep talking about making a deal every ten minutes or so. Natalie promised that James and Chelsia are safe from nominations this week. James is not wanting to quit and is really trying hard to stay up there. The odds are definitely against him right now just by watching the shape that each of them are in up there.

11:45pm Update. James just offered a deal to Natalie saying that he would drop if Natalie would put Ryan on the block. She was ready to take the deal and Ryan was not happy about it. Matt whispered to Ryan saying that she should take the deal but not actually do it. James then backed off saying that he'd rather win this on his own. Really interesting that the person that is struggling between the two is the one offering deals. It seems like Natalie should be offering the deals cause she is clearly in control of this competition at this point.

12:15am Update. My how things have changed. I said that Natalie was looking the best but shortly after my last update, things went the other way. Natalie is getting dehydrated and she's been pushing for deals. James looks solid up there now and he is determined to win after what happened with his eviction. She asked if she was safe trying to work a deal. She asked about Matt and he said that Matt would be safe too. Natalie is saying that she is feeling sick and is barely hanging on at this point.

12:17am Update. The HOH competition is over. James has won it and Natalie finally had to bail out. The competition lasted for about four and a half hours. Incredible effort from both of them!! A deal was made that James would not put up Natalie or Matt on the nomination block. After the competition was over, he told everyone that came up to him that he was holding to that deal saying that he wasn't going to do to others what happened to him last week. He said he has learned from getting a second chance in the house. Natalie is very upset about not being able to win it. Josh, Sharon, and Chelsia were also telling Natalie before it was over that they promised her safety as well. These endurance challenges are always amazing to watch every year cause they are tough.