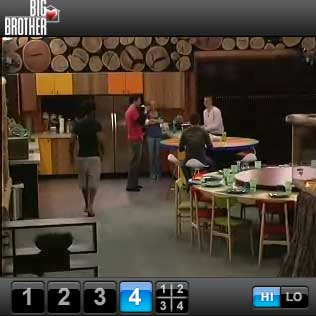 3:00pm Update - SPOILER ALERT!! We may find out if Allison and Sheila's secret lie about being together for 10 years is about to backfire on them. Josh told Sharon about the story which Sharon seemed to buy cause Josh is absolutely convinced of it. Eventually, I've got to think that the story is going to be told as false or proven false. Jen and Parker spent the night listening in on conversations. Parker has declared that his strike against the DR is over. Jen and Parker have talked about targeting James and Chelsia if they remain in the house. Parker just confronted Allison on things that he has heard that she has been saying about Jen. Still no love between Jen and Allison. The two aren't getting along at all to say the least. The votes at the moment look the same to send Jen and Parker home but I wonder if Allison may finish herself if she keeps stirring up stories.

9:30pm Update - Happenings in the house this evening. Josh has apologized to Amanda for the personal comments that he yelled at her during the argument the other night. The houseguests had boxing matches in the back yard and seemed to have a lot of fun. Dinner tonight is a goodbye dinner with the houseguests saying nice things about the couples up for eviction.
at February 19, 2008