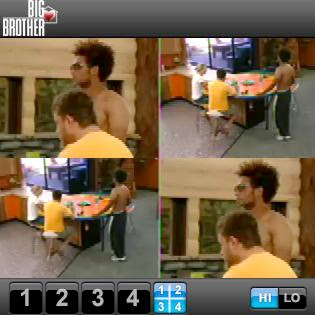 1:00pm Update - SPOILER ALERT!! What a night that I missed on the live feeds. All I can say is WOW. Major argument broke out. I have been catching up this morning watching video of stuff that went down. I have been saying all weekend that something was brewing and it finally exploded. Lots of stories have been floating around the house and Amanda has been stirring up a lot of it. I've been amazed that she keeps telling people stuff cause word of anything spreads within the hour in the house this season. It finally exploded last night. Things unfortunately got personal as well with comments that were being yelled back and forth. Chelsia went outside to confront Amanda on a lot of the comments that she has been saying. Things intensified when Josh just finally snapped and he and Amanda started having all kinds of words. He eventually had to walk off and then Alex was forced to get involved as well. Alex is mad cause her actions in the house effects him with the couples deal. Chelsia then got back into it and her and Amanda yelled for a while. This whole thing was definitely in the debate for biggest blowup in Big Brother history. Later, there were problems between Jen and Ryan after Allison and Sheila confronted Jen on stuff that she had been saying about Ryan. There is so much stuff in the house that has yet to air and I have no clue how they are going to fit it in before the next eviction episode.

7:00pm Update - Things are much calmer in the house today. There has been talk about the incident from last night among the houseguests today. Parker is saying that he is on a diary room strike and won't go into the DR when asked as he is still mad over being put into this twist of the game. One of the shockers of today for me anyway was something that was started on last night's episode. Allison and Sheila talked about knowing each other out of the house and told a few people about it. It was basically a lie that they started just to start with all the other secrets in the house. My surprise today was that they are still carrying that story out. Chelsia and Josh still think that its true and Allison was actually making up stories about their outside life telling it to Chelsia a little bit ago. How long till they start contradicting their stories and get caught on this? I can't see this as being a good thing for them especially the longer it goes. That sure is a gamble to make that story up and keep it going.
at February 18, 2008