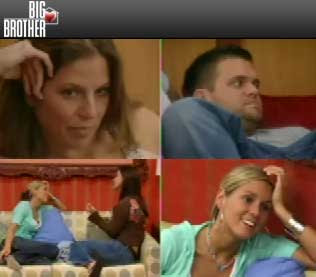 12:00pm - Update - SPOILER ALERT!! Calm night in the house last night. Lots of talk on what the votes will be like and the couples up on the block talking about whose votes that they have. There was also a lot of talk about strategy going forward depending on who gets HOH tonight. I still think it is Jen and Parker going home tonight but I'm pretty sure that Parker thinks he has the votes to stay. Not sure about Jen's thoughts on it. Tonight is the live show and eviction night so it should be an uneventful afternoon in the house as they prepare for the show.

8:15pm Update - Results of tonight's live show saw Jen and Parker evicted on a 3-1 vote. The new HOH are James and Chelsia. Live feeds are already back up right after the show ended. If I had to guess, I would say that they are going to for sure put up Alex and Amanda for eviction. I really am not sure who they would put up against them.

8:30pm Update - Remember when I said that Allison and Sheila's fake story was probably going to backfire on them? Well, it is going into effect. With James and Chelsia in power, Allison has admitted to the story being fake. Chelsia and James are now talking about this saying that they don't trust them now saying they don't know what story to believe whether it is true or not true. They just told Josh that he and Sharon were safe and weren't even going to be used as a pawn. Josh went to Allison and Sheila to get more information on their story and why they did it. Sharon is also in this conversation as well. Allison said that they just decided to make up this story of a new twist. They are really covering their tracks. Again, how did they think that making this story up was a good idea?

10:00pm Update - Big blowup between Adam and Sheila a little bit ago. Not sure what started it but Sheila got mad and was yelling at him while he yelled right back. She got upset about him getting as close to her as he did during the argument. Seems to be a deal where she is mad that they aren't on the same page. She then yelled her frustration to Allison but the whole house could pretty much hear her yelling. Adam came back after this and tried to get things settled down. She is furious over the last few minutes!! James and Chelsia have gotten their HOH room and have spent the last hour or so just hanging out in there away from the drama. Lots of strategy talk from them on what they should do as HOH. They've good logical thinking on how the game is going and what will get them the furthest. They need to use this one moment on the show where they are sitting watching the screen with all the houseguests in the kitchen on it. James says something along the lines of these are the people we have to take out to win the money. That has to make the show.