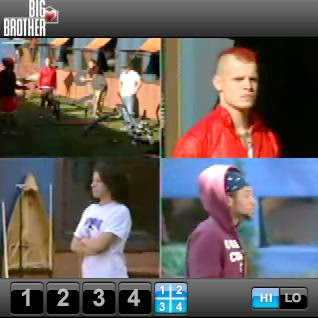 1:30pm - Update. SPOILER ALERT!!! When watching the feeds this year so far, I find myself saying many times "what is up with this cast??!!" This group is not shy at all whether it is conversations or their actions so far in the house. One thing is for sure is that a lot of the cast is attracted to others that they haven't been paired with in the house. One of the biggest drama stirrers in the house so far has been Amanda and this has all occurred over this weekend. To sum up my thoughts on this season so far with watching the feeds, all I can say is BIZARRE. This is one bizarre season so far and it's making me think toward this season being like season four. Josh said earlier that the veto ceremony will be held today. It will be interesting to see what happens after that when people realize how the votes are going to turn out depending on if the nominations stay the same. What is really strange is that there is finally an episode on TV tonight and it is going to be really odd to watch cause the time line is going to be so far off from what we are seeing now. Bizarre season, BIZARRE so far.

6:30pm Update - The veto ceremony has taken place and the nominations were left the same. That confirms that Jen and Ryan will be split up after this week. Expect there to be a lot of talking going on with trying to get votes locked down. As of now, it appears that Jen & Parker will be the ones to go home but it's Big Brother and anything can change within the hour. LOL.
at February 17, 2008