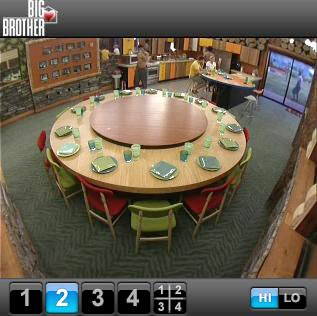 Live Feeds Update - 9:00pm. SPOILER ALERT!! Today has seen trouble with some of the couples but it has yet to lead to a major problem in the house. Talk of the problems are spreading around to people but no one has been called out publicly in front of everyone about anything. Trouble between Natalie & Matt and Alex & Amanda. Quite a bit of game talk and overall talk of shaking the game up but everyone seems to be waiting for the veto ceremony to take place before shaking it up. No veto ceremony yet and it probably won't take place today. The "what in the world??" moment of the live feeds tonight was the quad cam suddenly shutting down and after me reloading it, then going to a car commercial of a monkey trying to deliver a baby!! This happened two or three times while trying to load it up. I went to a single cam feed and it was fine. I had to see if anyone else was having problems and the message board was filling up with people trying to figure out what in the world was going on as well. LOL.

11:00pm - Update. Very funny moment a little bit ago with Josh, Chelsia, Sharon, and James all talking in the house. Josh started talking about a Big Brother casting bus ride which Big Brother wasn't happy about him talking about. They immediately started joking that they'd be hearing the Big Brother voice. Then, he got the Big Brother voice saying "Josh, STOP THAT". The look on his face was hilarious as they had the camera right on him. The house started cracking up as they heard it all over. He has been telling others that weren't there at the moment when it happened that he was messing with his microphone too much. That strict voice brought back memories of Jase in BB7 when he was teasing jumping into the pool and Big Brother got mad about it. The houseguests have pretty much just been in a big group talking about whatever for the last hour. Everyone seems to be getting along for the most part and lots of joking around.
at February 16, 2008