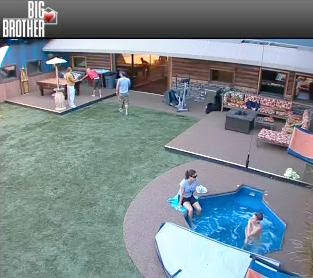 7:00pm. SPOILER ALERT!! I'm still trying to catch up today on things that I missed yesterday. I can honestly say that this is one of the most confusing seasons so far. Lots of voting talk today with people trying to see who is voting how. The veto competition has been decided and the winners were Matt and Natalie. The talk today is that they are not going to use the veto and the nominations will remain as is. Overall, definitely a quiet day compared to the other days so far. There is always tonight though for it to break loose. LOL. It is hard to tell when people are telling the truth in this house cause so many different stories float around. Sharon does seem to have come back upset at Jen over her eviction. She has definitely been gathering a lot of information about the happenings in the house since her return.

11:00pm - Not much going on in the house tonight. Mood is light. General chit chat around the house during dinner. There was some chess playing. There is some random game talk going on with Sharon seeming to be doing most of it. Lots of fans on the message boards are wondering if she is revealing way too much to too many people. Sheila and Allison had a game talk earlier planning stuff out later down the line no matter whether Allison stays or goes. They seem to have a good friendship. Allison has also been talking to Matt in the last few minutes trying to see where his vote is going to go. He did tell her "straight up I cannot give you my vote". It seems like the guys aren't doing a lot of game talking tonight or, if they are, we aren't seeing it on the feeds. The feeds mostly keep focusing on one conversation all night instead of splitting the feeds up. The talk is still that the veto won't be used and the nominations stay the same. If I had to predict right now with what I'm seeing tonight on the feeds with this week's eviction, I'd say that Jen & Parker are leaving. However, all it will take is for someone to leak some info leading to a major argument and all of it could change.
at February 15, 2008