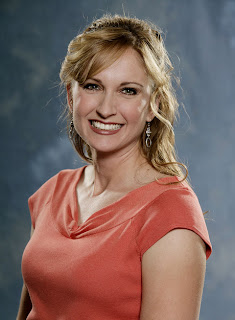 This week's Wrap Up Q&A is from Big Brother 8's Kail. Kail was the fifth person evicted from the Big Brother house this season. She was the last houseguest to not have to go to sequester so she has been able to go home and catch up on everything. I want to say a big thanks to Kail for taking the time to answer these questions for the Wrap Up. Here is what Kail had to say about her experience in the Big Brother 8 house.

I remember hearing that you have been trying to get on Big Brother for several years now. How long have you been trying and what made you interested in doing the show? I have been a fan since season one and started auditioning in season 5 and every season since then. (except all-stars) Finally season 8 was the season for me.

What was your strategy going into the house? Going in I wanted to align with an all-girl alliance. Right away I knew that wasn't going to work because they seemed so young to me. Also, I did not want to win HOH the first time and that seemed to change the first night too. I knew I had to prove myself right away being one of the older houseguests and a smaller personality.

What are your thoughts on the twists in the game this year with the "enemies" from your past and also America's Player? Well, we all know going in to "expect the unexpected" so I cannot complain. However, I do feel if I had my dad in the house he would have had my back to the end too. :) he he As far as AP... I am happy for America to be able to participate in the show.

When you found out about America's Player, was there anything that really stuck out to you that made you think "that is why Eric did that"? Absolutely! Almost everything he did now makes sense. Did he have to go over the top on "bashing" fellow houseguests to get what he wanted? You'll have to ask him. I would like to know myself.

I know one thing that viewers seem to think is that living in the Big Brother house is a breeze. I'm NOT one of those that thinks that by the way after watching the show all these years. LOL. Can you tell us what it is like to live in the house and have this game going on constantly while also having cameras on you 24/7? There is no escaping. Even if you find a moment to yourself without the other HG's then you have the cameras to deal with. It is very difficult. The MOST difficult hurdle for me was being homesick! Something I never expected to happen to me. When I say sick, I mean sick!

The first HOH is always the toughest to win cause it seems to put a target on the person's back immediately. What were your thoughts on winning the first HOH and also the reasoning on your nominees for eviction that week? The first HOH was horrible because you know you now have a target on your back. Plus, every HG is approaching you telling you about ALL these alliances that are happening around you, hence you jump into one because you are afraid you are being left out. That explains why I nominated Carol. I was told she was in a 6 person rival alliance.

With the history of pawns going home in this game, how stressful was it to keep hearing that someone is putting you up as a pawn? I was suppose to be only Dustin's pawn. I agreed to be his pawn and for some reason felt pretty good about it. I did not want to be Daniele's pawn! I had no choice...and...I could not hang on that bar for another second. I took whatever verbal she would give me. If only I was 15 years younger. :)

You had an alliance formed early on in the game. Where do you think it went wrong? It went wrong with Nick. Everyone else I feel would have been loyal.

If you could go back and change anything that you did in the game, what would it be? I'm still thinking hard on that one. That is a difficult question when you feel that everything happens for a reason. You'll have to ask me that one again later down the road.

What was your favorite non game moment in the house? None. But, I am so glad to have Jen as a new friend.

Dick has received a ton of criticism for his actions in the house. What are your thoughts on his game play? Richard has definitely crossed the line in "game" and in "life" play in my opinion. I feel his very crude, violent remarks (rape) toward Jen and myself is criminal and brakes every game rule (if there are any). I do not admire that kind of game play.

I'm sure you're sick of getting asked this question. Thoughts on the bunny suits? LOL. Yes, most asked question. I do not have the suit... I wish I did, I would be rich. he he Well, I guess the good news is I wont be forgotten.

Are you a Big Brother TV viewer, live feed viewer, or both? I was never a live-feed viewer. I will be next year though.

Who are you pulling for to win Big Brother 8? Zach.

How has it been getting back to your normal life and getting to interact with the Big Brother fans? The fans is what made the whole experience worth it! Another positive way of looking at being out in week 5. I'm not in the Jury house with NO contact with my family, friends, and fans. As far as getting back to normal...not quite there yet. he he

Overall, how was the experience on the show and would you do the show all over again? To soon to tell. If my mom had it her way... I would not do the show again.

To close this Q&A, what would you like to say to all the Big Brother fans out there? I want to thank everyone who takes the time out of their busy summer to watch the show. To each and every one who has found a way to contact me and let me know they are a fan... a BIG thank you to them! Only the best to everyone! Jer. 29:11 Kail Harbick BB8

Thanks again to Kail for taking time to answer the Wrap Up questions!!