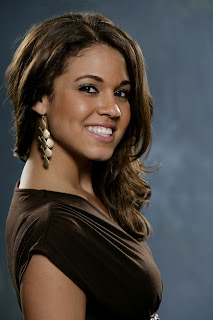 This week's Wrap Up Q&A comes from Big Brother 8's Carol. I sent Carol some questions for the Wrap Up and thank her very much for responding!! Carol was the first person evicted on this season's Big Brother. She was also one of the three twists in this season's game. The twist of this season has been being forced to live with a rival of your past. There were three of these twists and Carol was paired with Jessica who were former rivals from school. Here is what Carol had to say about her experience on Big Brother 8 and the game since she left.

How has your experience been since leaving the Big Brother house with getting back to your normal life and interacting with fans of the show?
ITS BEEN GREAT INTERACTING WITH THE FANS AND MY LIFE IS NOT QUITE BACK TO NORMAL YET BUT IT IS SLOWLY GETTING THERE :)

Had you ever seen Big Brother before entering the house and what made you want to do the show?
NO I HAD NEVER WATCHED THE SHOW BEFORE. BASICALLY I WANTED TO DO THE SHOW BECAUSE I FELT IT WAS AN OPPORTUNITY THAT I COULD NOT PASS UP AND IT WOULD BE A ONCE IN A LIFE TIME EXPERIENCE

Obviously, you were one of the twists in the game this season. What were your thoughts on finding out about the twist including you, and also the Dick/Daniele twist and America's Player?
I THOUGHT MY/JESS PART OF THE TWIST WAS REDICULOUS AND PETTY. I FELT BAD FOR DANIELE HAVING TO DEAL WITH THE STRESSFUL SITUATION. I THINK THE AMERICA PLAYER WAS A GREAT TWIST.

What kind of strategy were you wanting to play in the Big Brother game?
I JUST WANTED TO GO IN AND TRY TO HAVE A GOOD TIME. I NEVER REALLY HAD A STRATEGY

Can you describe what it is like to live in the house with all these cameras on you 24/7?
IT WAS AWFUL........ IF YOU EVER NEED TO GET AWAY AND SPEND TIME BY YOURSELF, YOU COULDNT BECAUSE THERE ARE ALWAYS THOUSANDS OF PEOPLE WATCHING YOU AT ANY GIVEN MOMENT. YOU CANT HIDE ANYTHING AND ITS HARD NOT TO EXPOSE YOURSELF TO THE WORLD.

With all the craziness that has happened in the house since you left it, are you glad to be out of there? LOL.
YES I AM SO GLAD I NEVER HAD TO GO THROUGH ANY OF THAT

Who do you feel is the most overrated and underrated players in the house?
OVERRATED=JESSICA UNDERRATED=ZACH

Are you a live feed viewer or just a TV viewer?
JUST A TV VIEWER......

What have been some of your favorite and least favorite moments that you've seen this season on the show?
LOVED WHEN JAMEKA WENT OFF ON DICK ALMOST THREW UP WHEN I SAW JESS AND ERIC MAKE OUT

Do you feel that America's voting has helped Eric's game or hurt it?
I THINK IT HAS HURT MORE THAN ANYTHING

Who are you pulling for to win Big Brother 8 and why?
JAMEKA.... SIMPLY CAUSE I FEEL THAT SHE IS THE ONLY DECENT PERSON LEFT.

If you had it to do over, would you do Big Brother again?
I WOULD IF JESSICA WAS NOT THERE

A big thanks again to Carol for answering the questions for the Wrap Up!!