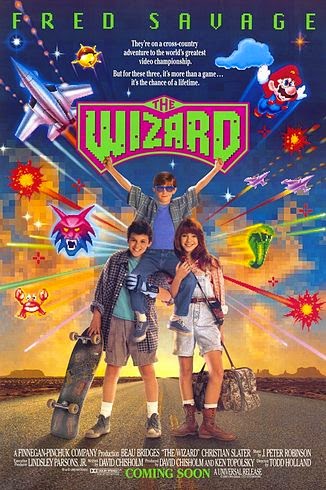 The 25th anniversary of a movie that was a big part of my childhood and many others just recently happened in 2014.  "I love the power glove, it's so bad".  Does that line ring any bells?  I know it does with me.  It probably gave more hype to the power glove than anything else.  Well, the commercial for it though was pretty amazing too.  The Wizard was released in 1989.  The movie was about a family that had been broken up due to a family tragedy.  Jimmy Woods, played by Luke Edwards, had lost his twin sister to a tragic drowning years earlier.  The effects of that caused a divorce and the split of the family all of which caused a mental breakdown for him.  Things pick up after Jimmy is put in a institution only to be broken out of it by his older brother Corey, played by Fred Savage.  This sets off a multi-state wide chase as the family tries to track down the two kids.  Corey and Jimmy run into a girl along the way named Haley, played by Jenny Lewis.  It is then that they discover that Jimmy has an amazing gift.  Video games.  He picks up on games easily and dominates them.  This leads them to heading to California for the video game championships.  Nintendo is obviously featured a ton in this movie.  Lots of things happen on their journey.  Battling another video game pro named Lucas who is on the same mission to win and it also gave us another power glove line ("Hey, just keep your powergloves off of her pal").  LOL.  The trio of Corey, Jimmy, and Haley have to battle many things besides Lucas.  One being Putnam who has been hired by Jimmy's mom and stepdad to bring him home.  The other side of the family is trying to get to Jimmy first which is his dad and brother played by Beau Bridges and Christian Slater.  The comedy of Bridges and Slater is awesome, awesome stuff.  I laughed hard at it then and do now.  They play off of each other so well.  This movie was also a way to launch the new hit game that would do just fine in it's successful history, Super Mario Brothers 3.  I mean come on, how many of us did not use that movie to remember where that hidden warp zone was?  LOL.  I know I did.  Thanks Jimmy.  Let us not forget the awesome soundtrack too.  Oh, if we only could have gotten a soundtrack.  The beautiful locations of where they shot the film.  When I see so much of that scenery on TV now, it makes me reflect on this movie.  Director Todd Holland posted a lot of memories of this movie on his Twitter account last year giving fans a glimpse of what it was like shooting the movie with pics and stories last year.  I loved all of his posts and thank him so much for doing it.  It brought back a lot of memories and also let me see pics that I had never seen.  When I think of this movie, I think of my childhood.  This was what a lot of my childhood was with me and my friends.  All of us sitting around playing games on the Nintendo Entertainment System.  The good ol' NES.  We wore that thing out.  When this movie came out, we watched it and watched it often.  It was a go to movie for us for fun and laughs.  The movie had such a great story too of the ups and downs that this family had been through.  They had been such a great and tightly bonded family but with them wanting to get back there but unable to figure out how to do that.  It has been great to see the fandom celebrating 25 years of this great and fun movie.  When I see this movie, it puts a big smile on my face.  I smile and remember a simpler time being a kid.  The whole movie is able to just time capsule 1989 for me with the cast, music, and the gaming.  It's perfect.  I'm a little late on saying happy 25th as we aren't far from the 26th anniversary but happy 25th anniversary to a movie that means a lot to a lot of people! If you want to relive a lot of memories with this movie, go to Todd Holland's Twitter which is @ToddHolland3 and look up his anniversary posts from last summer.  It will make you smile too.