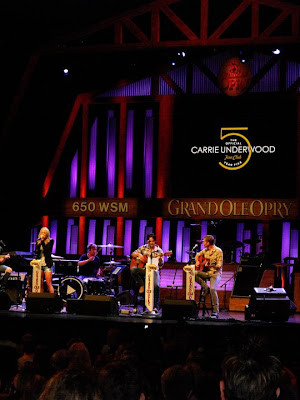 Carrie Underwood returned home last night.  The place where it all started for her.  American Idol.  The year was 2004.  During the St. Louis auditions, this 22 year old named Carrie Underwood from Checotah, Oklahoma took her place for her Idol audition.  She wowed the judges and she grabbed all of our hearts immediately.  She had this great voice and such a sweet personality.  She was off to Hollywood and off to her destiny.

When I was watching her Idol performance last night as she debuted her new single, “See You Again”, she was just glowing up there on that stage.  She fought back tears just talking about looking back on it all.  Before the performance, Idol ran a video package which included some old footage of her from American Idol.  She was walking around the field at home.  I am fairly sure that this footage has never aired as that is one bit of footage that I don’t remember seeing.  I could be wrong though.  In this video, she was talking about how she had never been on an airplane.  Never been in a big city.  Just this wide eyed girl with such a shyness to her.  She was speculating on what things would be like for her doing these things.  You could see the battle of nerves with excitement in her.  All of her dreams right there in front of her but there was a genuine fear in her.  You may have heard her tell the story about when she was on her way to the airport to catch her flight to Hollywood.  She almost went home.  Fear and nerves were getting the better of her.  Her dad was driving her to the airport and she was struggling.  He told her that if she didn’t want to do it to give him the word and they would turn the car around to go home.  She decided to continue on and keep pushing forward with the bigger fear of the “what ifs” that she felt she would have to deal with for the rest of her life if she went home.  She boarded that plane and the rest is history.

She captured all of our hearts and was the clear cut favorite to win Idol including Simon Cowell telling her that not only would she win American Idol but she would be the most successful Idol alum in the show’s history.  Both statements came true. Her confidence continued to grow on that stage. She was out of her element there in Hollywood and she would fully admit it.  American Idol season four in 2005 was the year of Carrie as she won the competition.  Carrie stuck to her roots sticking with the demand that she was going to make a country album despite all sorts of pressure to go the pop way.  Her first single would be the hit that took her to the next level, Jesus Take The Wheel.  A fresh faced Carrie was still learning her way telling people during the video shoot that she needed to be told what to do.  She had never shot a video before and explained to the crew that she needed to be instructed on what to do cause this was brand new territory for her.  She continued to gain experience video to video and was branching herself out.  Learning to have fun with it.  Gaining confidence more and more.  She would hit the stage with tours opening up for various singers.  Taking the Opry stage.  Winning awards. Starting to headline her own tours. Being invited to become a member of the Grand Ole Opry.  The list goes on and on.  Now, she is selling out the Blown Away tour.

I have been to many Carrie shows over the years and it has been a blessing to just watch this girl grow.  No chance to meet her yet as I'm sure some will ask.  LOL.  Seeing her growing more confident on stage and in herself.  She has so much fun performing and interacting with the fans. We all have fun watching her and listening to her.  I often say that I could listen to her sing the phone book.  Just this amazing voice.

Carrie is a perfect example of never quit chasing your dreams.  I am so proud of her and find her to be such an inspiration.  Such a strong faithed person.  She kept at her dreams.  She didn’t back down to fear.  She took that step and just kept moving forward.  She is also that great example of good things happen to good people.  How much of a blessing is it to see when things like that happen?  When I watched that clip of her walking through the field from back in her Idol days, my first thought was that was the Carrie that immediately hooked me at the time.  That soft spoken, shy, sweet person that was ready to go for the ride of her life.  Looking so uncertain but excited for the challenge.  I think so many of us could relate to that moment.  I know I can.  Seeing what all she has accomplished is just awesome and we’ve seen her grow from that shy person to this confident person. From taking that Idol stage for the first time to now being one of the biggest music superstars in the world.  Growing more and more.  Last night was definitely a homecoming for her.  I think it felt like a homecoming for all of us that have watched and been along for the ride with her.  Never give up on your dreams.  Always chase them.  You never know what might be waiting for you.  Take that step in faith and go for it.  As her song says, "Thank God even crazy dreams come true."

If you missed last night's great performance of "See You Again" and the great look back video on Carrie, here it is: