The New Series, VEEP, Premieres On HBO On April 22nd. 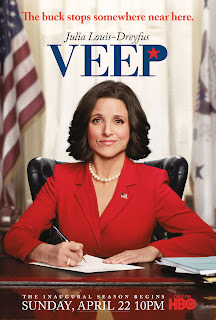 I got word this week on a new show starring Julia Louis Dreyfus which will be premiering on HBO on April 22.  Here is the preview write up on the show.

Former senator Selina Meyer was a rising star in her party, a charismatic leader who seemed to have unlimited potential.  Some pundits even thought she might even occupy the White House some day.

Then she became vice president.

Julia Louis-Dreyfus (Emmy winner for “Seinfeld” and “The New Adventures of Old Christine”) stars as Selena Meyer in VEEP, the story of a woman who becomes vice president, only to discover the job is nothing like she expected, but everything she was warned about.  Created by Armando Iannucci (Oscar nominee for co-writing “In the Loop”), the new comedy series kicks off its eight-episode season on April 22, exclusively on HBO.  VEEP follows the whirlwind day-to-day existence of Vice President Meyer as she puts out political fires, juggles a busy public schedule and demanding private life, and defends the president’s interests, even as she tries to improve her dysfunctional relationship with the chief executive.