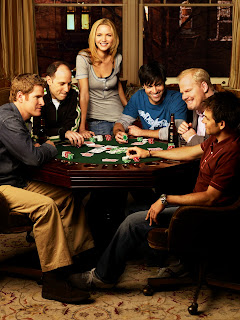 My Boys premiered this past weekend. I really enjoyed the first episode. Not as crazy about the second episode. I had gotten behind on the show but watched the marathon of episodes on TBS. Really good episodes. I laughed a lot at it. The Facebook episode was hilarious with Brendan and Mike competing over the girl. The Spring Training episode was fun with them taking the show on location. How can you not laugh at the story of Mike hyping about how he can strike out all of these baseball players? Yeah, it didn't go so well for him and it was really funny TV. The stakeout was funny with the guys trying to figure out who the new guy was that PJ was seeing. I've loved this show since the first episode. The writing is good and the casting is good as well.

Yeah, Comic-Con took place this past week but there was another even ongoing as well. Pacey Con. What is that? Well, Joshua Jackson took to the streets to celebrate the character that is Pacey Witter. Pacey is of course from the show Dawson's Creek. In a Funny or Die video, Jackson roams around the Comic-Con event thanking fans for their support of "the greatest character in television history". The video is a lot of fun and includes the famous Dawson's Creek theme song playing in the background. This is a must see video and is really good.
Pacey-Con with Joshua Jackson from Joshua Jackson

CBS announced on their press tour that this season's Survivor will be the older castaways against the younger castaways. I still say that CBS's decision to move Survivor to Wednesdays is insane. Insane!!

Just a few notes on Big Brother. Monet was voted out last week and the new HOH was crowned in an endurance challenge that came down between Matt and Ragan. After over two hours of the challenge, Matt won the HOH. This meant trouble for the couple of Rachel and Brendon as their power trip of a move last week to call out Matt with a house meeting blew up in their face. Matt had the power and they were back pedaling like crazy to try and fix things. Rachel and Brendon have not been very good at this game so far. The clip of Andrew continuing to walk in on them during their make out sessions was hilarious. What is the guy supposed to do??!! It's his room too. LOL. I just have to comment on Hayden and Kristen's "secret" relationship. If you're trying to hide this relationship, you probably don't want to throw the other person in there every time you make a deal with a HOH. Save me and save the other person too. LOL. I did find it funny that the Brigade thinks that they are cousins. I have still yet to pick a side on who I am cheering for in this game. I do want the Brigade to get a reality check but yet there are people on the other side that I'm not crazy about. I find Britney to be hilarious at times with her comments. The nominations of Matt's made no sense to me with him nominating Andrew and Kathy. I can't figure out Matt. Sometimes I think that he is really smart at this game and then he makes a move that leaves me thinking what in the world? I'm still waiting to see if he is this genius at this game or if it is all hype. He talked of a backdoor on Rachel or Brendon this week and it is possible with the POV coming up. I haven't been watching the feeds so I don't know how this plays out but I'll find out tonight obviously. Really enjoying this season so far.