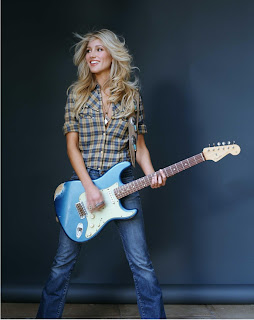 I got the opportunity to talk to Whitney Duncan on Saturday night and she was so nice to answer questions for me for the Wrap Up Q&A.
Wrap Up Q&A:
First off, great show tonight.

Whitney: "Thank you. I appreciate that."

I’ll just start from the beginning. What made you know that singing was what you wanted to do?

"I started when I was super young, like three or four years old. I was obsessed with Elvis Presley. I was watching him on TV and it was like his 68th comeback special where he was in the all leather and I knew that was what I wanted to do and what I wanted to be. So, I was singing every weekend at church, fairs, festivals, really anything around home that I could. I just knew that was always what I wanted to do. I just knew from that early and, I mean, granted that I never knew if I’d have the opportunity but once I got a little older, I started pursuing it heavily when I was 15 and started going to Nashville, writing songs, got my first publishing deal at 17. So, it was just crazy. I never doubted it though."

You say that Elvis is your musical influence but do you have any others besides Elvis?

"I do. I loved Elvis and he is really who made me want to sing but my dad really liked to listen to rock and roll. I loved Bruce Springsteen, Eric Clapton, The Rolling Stones, John Cougar Mellencamp. Then, my mom would listen to nothing but country from Tanya Tucker to Travis Tritt to Patty Lovelace to Tammy Wynette. So, I was really heavily influenced with all of those people. Then, once Shania came out, I really liked her and was very influenced with her as well. Also, Bonnie Raitt and people like that, I always listened to."

Can you talk about the story with the song, My World Is Over, which involved Kenny Rogers?

"I co-wrote the duet with Kenny Rogers. This was years ago and I was on Capitol at the time cause I got a record deal at 17. I was really, really young and didn’t really know what kind of musical direction that I wanted to take and at that time, he had heard the song and wanted to do a duet on it so of course I was thrilled with that. We did that, shot a video, and actually went on the road with him that summer opening shows. He’s a great, great guy and singer. That was really cool that he liked that song."

I have to mention this cause I’ve been watching the Power Picks on CMT. You’re doing very well.

You’ve beaten Kenny Chesney and also Sara Evans with something like 80% of the vote.

What are your thoughts on that?

"I can’t believe it. I don’t know who is voting. (laughs) I’m just super excited because the show just came out and the video just came out and CMT hasn’t been playing it a TON but just enough to where I’ve been getting a lot of comments on My Space and sending me messages saying that I saw the video and that it was really good. That is really exciting and then when I saw the Power Picks, it just blows me away that people are responding as much as they are. It’s really great."

How did you get involved in Nashville Star? Were you interested in the show before you got on it?

"Yeah, I always watch all of those shows just because of being in the music business. I love it. Once you watch that first episode, you want to see who wins. I’d watch Nashville Star every year. The year that it came up for me to do it, I had the opportunity to go and audition for it. At that time, I was just song writing so I just thought about it and was thinking that I had nothing to lose. I’m not even looking for a record deal at this time so I’ll give it a shot. I didn’t think for the life of me that I’d actually make it. So, when I made it, it was really cool and a good experience. I said that it’s like boot camp into the music industry. It’s interesting. I don’t feel like it shows true artistry in the way that you get 45 seconds to sing on the show and it’s not your song. It’s someone else’s song except for original song week. So, it’s really tough to get who you are as an artist across on the camera when you’re having to do other people’s songs because I’m such a songwriter. It was tough but it was fun and a good experience."

What kind of style would you describe your album to be?

"I would say that it’s definitely country. I’m country but it’s also heavily influenced with rock as well. It’s very country/rock. People have told me that you can definitely hear those influences like Shania and Tanya Tucker in the music as well. I think the album is good because it’s a variety of songs and I think there is something on there that everyone can identify with. There is some song on there. I cowrote the whole thing so I’m really proud of it. I can’t wait for this record to come out. It’s really so exciting."

Where were you the first time that you heard your song on the radio?

"I had just left a radio station in Chattanooga, Tennessee. They knew that I was going to be in the car when I left the station so they played it after I left. I was like, oh my gosh, that’s the first time that I’ve gotten to hear it. That was really cool and very exciting. It really is and it’s still exciting every time that I get to hear it because it’s by accident. They don’t know that I’m listening. You know what I mean? So, they’re playing it because they like it. So, that’s cool."

I have some rapid fire questions on favorites and such.
Favorite Elvis song?

"Are you lonesome tonight"

Something that the fans would be surprised to know about you?

"Obviously Elvis if that was a possibility. Since I have to move on, I would say John Cougar Mellencamp. I would like to meet him so much cause he was such a big influence on me as well. There are so many more. (laughs)"

When can we expect the album?

"The album will come out early 2009. I think around February. We should know in the next couple of months. It should be up on the website and I’ll do a big blog and publicity for it. It should be February or March."

"Yes, you will know for sure. Definitely."

Thanks again to Whitney for taking the time to answer the Wrap Up Q&A questions!! She was incredibly nice to talk to and I will definitely post the information on her album release date when it is announced. Check out more on Whitney Duncan at her website at http://www.whitneyduncan.com and http://www.myspace.com/whitneyduncanmusic