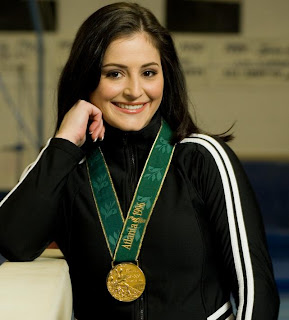 An Olympic special edition of the Wrap Up for you today. I’ve got a Wrap Up Q&A with 1996 Olympic Gold Medalist, Dominique Moceanu. Dominque was a part of the Magnificent Seven gold medal women’s gymnastics team in 1996. That team was incredible to watch and captured the attention of the country and the world with their gold medal winning night in Atlanta. I'll never forget the fun of that night in cheering on The Magnificent Seven. They definitely made America proud with their great accomplishment. I thought it would be fun to get Dominique’s thoughts on the current Olympics and also look back at her career. Dominique has always been my favorite gymnast so this was definitely a lot of fun!!

The country was so wrapped up with the incredible gold medal performance of you and the Magnificent Seven. The crowd that night for the team competition was so incredible as well cheering all of you on. What are some of your memories of that special night in Atlanta?
"Winning the Olympic Team Gold medal in front of my home country was the ultimate dream come true. My memories of the 33,000 audience members at the Georgia Dome cheering and chanting “U.S.A., U.S.A” is something that will be etched in my mind forever. Another sentimental moment was when I received my gold medal with my teammates and watched the United States flag be raised for the first and only time in the Women’s Team Final competition. The entire crowd sang our National Anthem and I felt an immense amount of pride to be wearing the red, white, and blue. Becoming an Olympic Champion changed my life and has enriched me in so many ways. I’m thankful to have been able to represent my country and make America proud!"

You and the team were all over the place following the Olympics with media appearances and also including being featured on one of the Olympics Wheaties boxes.. What was the frenzy like that followed the Olympics?
"My post-Olympics life was the most chaotic time in my life. I was pulled in so many directions. I traveled the country doing a 100 city post-Olympic tour. I felt like a rock star for a while living in and out of suitcases, meeting the President of the United States, and reaching out to my fans all over the nation, and performing the sport I loved. All of this happened before I even got my driver’s license!"

I don’t know if people really get the appreciation of just how much work goes into training. What was your daily training like going into the Olympics?
"Before the Olympics I trained seven to eight hours a day and six days a week. It was a full time job and every part of me stayed devoted and disciplined to my training regiment inside and outside of the gym."

Gymnastics is obviously a very physical sport but it can be a very mental type sport too. How is it comparing the two aspects of gymnastics?
"The mental aspect of the sport is extremely important, because if one cannot handle the pressure that comes along with being an Olympic level athlete than it makes things much more difficult to perform. I’ve always believed that the mental aspect of the sport is much harder than the physical. Yes, at times my body was run down and exhausted, but if my mind couldn’t pull it together I wouldn’t have been able to get through practice. No matter how much talent one has, one has to be equally, if not stronger, mentally to handle gymnastics at its highest levels."

Your floor exercise performances were always so fun and upbeat. What goes into putting those together including picking out the music?
"Most of the time my coaches gave me a few options of music and then I decided which one I liked the most. As I got older, I had more say into the music of my floor routines and choreography. It’s extremely important to have a good combination of both. A gymnast must feel comfortable with both the music and choreography to perform her best in competition. A lot of preparation to perfect this combination takes place in practices."

I got to attend one of the shows from the Tour Of World Gymnastics Champions in 1997. It is still one of the most fun events that I’ve ever been to. What was the experience of that like to reunite with everyone and get out on the road for the tour?
"The post Olympic gymnastics tours have some of the best memories in my gymnastics career because there was no pressure of the judges scoring my routines! It was all about performing and meeting fans and this is what I loved most. I will always be a competitor and thrive on this aspect of the sport, but after the most pressure packed competition of one’s life-- the Olympics--I needed a break and the tours allowed for that relaxed environment."

Do you have any funny road story to tell about traveling with everyone during the tour?
"We loved to play pranks on one another on tour, and once someone had a bright idea that it would be funny to switch the music of my floor routine during a live performance. I was a trooper and although lost at first, I completed my routine and made up things as I went. I was thankful when that experience was over!"

You made a comeback in 2000 which unfortunately didn’t result in an Olympic appearance due to injury. What happened that caused the injury?
"I believe overtraining caused my injury. I pushed my body to its limits and my coaches didn’t see that my body needed the rest in order to have longevity. Of course this happens often in gymnastics, but at the Olympic Trials in 2000, it was just a case of “the wrong place at the wrong time” injury which led me to two surgeries; a knee and shoulder."

The Magnificent Seven got a huge honor recently when you were all inducted into the U.S. Olympic Hall Of Fame. You even won out over the 1992 Olympic basketball Dream Team with the fan vote to get inducted. How was that experience?
"What an amazing highlight in my life. My teammates and I were so honored for this wonderful achievement and next to the Olympic Gold Medal this is one of the highest honors -- an Olympic athlete can achieve so it was extremely memorable to be in the class of 2008 with an eclectic group of Olympians."

Moving on to the current Beijing Olympics. Nastia Liukin and Shawn Johnson finish with gold and silver in the individual all around. The women end up with silver in the team competition and the men end up with a bronze. What are your overall thoughts on the happenings in Beijing?
"Overall, I’m proud of our athletes. Given the circumstances and injuries they’ve had to endure our Women’s Team really should be proud because they WON the silver medal and how many people can say that they’re second in the best at anything in the world? They made America proud and with Nastia and Shawn winning the gold and silver in the All-Around final is like the icing on the cake. It was a fantastic competition to see them battle it out!"

A lot of talk has been made about the age of the current Chinese Olympic gold medal winning team. I wanted to get your thoughts of how you think age might factor into such a high profile event such as gymnastics since you were the youngest on the 1996 team. Did your younger age affect you at all with the pressure of the Olympics or did you find it easier being younger than the others?
"Is there a chance that the ages of the Women’s Chinese Gymnastics Team were falsified? Yes. Has the Chinese Gymnastics Association provided all of the proper documentation to prove and verify their ages? Yes. The international Olympic Committee already stated before the Women’s Gymnastics competition began that this was a closed subject and there would be no further investigation on it, but Bela and Marta Karolyi continue to show poor sportsmanship in the host country of the Games by strongly accusing the Chinese of cheating in an extremely undiplomatic fashion. It’s no secret that the Asian gymnast’s have always been among the smallest and lightest of the competitors in gymnastics. This is nothing new and in the Western world, we see our fifteen turning sixteen year olds as much more developed, but I can assure you that when I competed at the Olympic Games I looked like a ten year old too. Although I was the youngest on my team at the Olympics, I felt the pressure just like everyone else and I could handle it. I might’ve felt the pressure more in some ways because we were in our home country and the Olympic Gold was within our reach and it had always been a personal goal of mine."

What advice would you give to the current group of gymnasts including the pressure that is likely to be on them especially with Nastia and Shawn getting so much attention with their medal wins?
"Just enjoy the ride, it’s a hectic one but exciting one at the same time, and will often times leave you drained. You won’t trade it for the world though so take it all in and make the most of your experiences by really enjoying every great opportunity that you get! You’re about to go on the journey of your life!"

I’ve read that you’ve moved on to a new career in your life and that is being a wife and mom. How is that going so far and what else have you been up to in recent years?
"Being a mother is the most rewarding job in the world! The birth of my daughter was the most magical day, not only because she was born, but because she came on Christmas Day. She has changed my life for the better and has enriched my life in so many ways. Besides being a mother and wife, which takes up most of my time, I am still heavily involved on the gymnastics scene. I teach private lessons, coach, teach clinics and do choreography across the country for gymnasts. I am also finishing up my business degree and will be the first one in my family to graduate from college in the Spring of 2009 and I can’t wait!"

What would you like to say to all the fans that have followed your career and cheered you on for all these years?
"Without my fans, I wouldn’t be where I am today. I’ve always credited my fans for being the “best in the world”. I have such a large following and will be grateful to them always for the support and love they’ve given me. Thank you for your words of encouragement and belief in me and my career. You don’t know how many times it picked me up when I was going through tough times!"

A huge thank you to Dominique for taking the time to answer the questions for the Wrap Up Q&A!! For more info on Dominique including blogs, schedule of appearances, photos, video, merchandise, and more, head over to her official website at: http://www.dominique-moceanu.com/ It is a great website so definitely check it out!! Take care and God bless!!
at August 15, 2008