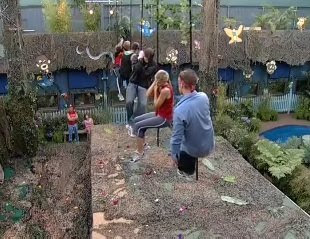 The HOH endurance competition has been playing out tonight since the show ended and I’ve been watching it. SPOILER ALERT!!! I’m going to recap this in real time and just add to this paragraph as I continue to watch. I was beginning to get concerned about the longevity of this challenge with how brutal it looked when the show ended. The feeds returned at about 8:20pm. One thing to note about the swinging is that it wasn’t consistent like it looked when the show went off the air. They get slammed into the walls several times in a row after a few minutes but then have some down time to just hang in the air. It isn’t non stop like I thought it might be. Jerry was the first to drop out at 8:30pm and was definitely hurting saying that he couldn’t feel anything in his legs. That is one rough competition for him to be in.

8:45pm: At first, there was the monkey sounds being made as a warning before they sent them crashing into the wall. At this point, they’re just sending them without any notice. Let me say that these are some brutal hits happening. They are having a lot of laughs about it though.

8:55pm: Keesha is out after she slammed into the wall and that was it for her.

9:48pm: The swinging into the wall is beginning to get violent as these hits are getting brutal. Michelle just dropped out after a pretty brutal slam into the wall. She is saying that her leg got caught in the net and it pulled her off. Down to three left.

10:20pm: Memphis, Dan, and Ollie still remain. Jerry is now throwing some balls at Memphis for him to catch and throw. Memphis threw one earlier that hit a window. Something that they’re doing to break the boredom. Memphis joked that if he hits the woman with the camera that he gets ten points. Then, they zoomed in to show the camera lady in question up on the roof. Unusual for them to show crew on the feeds.

11:07pm: Memphis just finally dropped out. He just couldn’t take it anymore. We’re left with Dan and Ollie as the final two. The three of them had not been talking for at least an hour. Very quiet. The only talking going on has been the houseguests outside watching the competition as they talk to each other and then yell encouragement to the ones still competing.

11:36pm: Dan and Ollie both talking about how long they can last. Neither is budging. Deals have been talked about but neither of them wants to fall. Both are saying that the other is safe. Dan is now offering a 2 for 1 deal telling Ollie that if he falls, he'll offer Ollie safety and another houseguest of Ollie's choosing.

11:40pm: Ollie just dropped. Dan wins HOH. HOH lasted almost four hours. Both were immediately tended to by the other houseguest bringing towels to them as both were shivering badly. It appears that a deal was made but I’m not sure what was done. There is talk that Ollie chose Michelle as the person to keep safe along with him but I didn’t hear it for myself. Others did hear it though. We did get a nice little surprise from Real Player tonight when they decided to put up trivia instead of showing us the competition for the last ten minutes of it. It’s always fun to watch a competition for three hours and however extra minutes only for them to block out the rest. When the feeds returned, we saw Ollie drop five seconds later. Big Brother After Dark on Showtime was getting to watch the HOH while we were blocked out on the feeds. I hope they’ve got a good explanation for this cause there are a lot of mad people tonight including myself.
at August 21, 2008