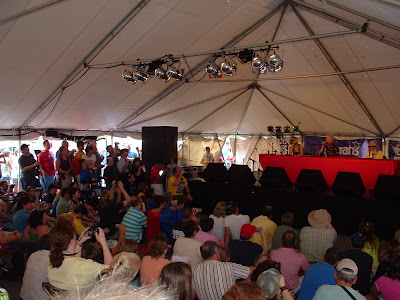 Best Superman Celebration EVER. Well, for me anyway based on the headliner. I'm a big Allison Mack fan so I was thrilled when I learned that she would be the headliner at this year's Superman Celebration in Metropolis, IL. I had a great time. I met several of the Celebration message board people which were fun to talk to and made the line times go by incredibly quick. They were a big help in coming up with game plans on the autograph sessions or whatever events. I got to meet the fan that likely traveled the longest of anyone to get there, from Australia. Great guy. Friday consisted of waiting in line at 8am to get tickets to meet the celebs on Saturday which I was just thankful to get the tickets. I went over to the Superman baseball game after that and had a great time. Lots of fun. Today was the main event of the weekend with all the celebs in attendance. We rolled in over there around 8:30 or so. More autograph tickets were released and went extremely fast and were gone not long after they were offered. Glad that I already had mine!!! I went through in the 9am line. They announced that due to the length of time that it was taking the line to get through that they weren't allowing people to take pictures with the celebs. I got to meet Ned Beatty first and then of course Allison Mack. Ned was very nice and seemed to really be enjoying meeting the fans. Allison was incredible too. She seemed to really be enjoying herself as well. I got to chat with her for about 30 seconds or so. I was so thrilled to get to meet her.

On to the Q&A. The tent was PACKED with people. After the two autograph sessions, Allison Mack, Ned Beatty, and Noel Neill made their way over to the tent. I should point out that the reason that Noel wasn't mentioned in the previous meeting stuff was that they had her in a separate location and I didn't get over there to meet her. Anyway, major photo opportunity when Allison and Ned stood in front of the Superman statue. They made their way over to answer questions. Big ovation for all the guests as they were introduced. Allison went over and hugged Noel Neill before the Q&A started as I doubt that she had gotten to meet her yet. All of them were a lot of fun with their answers. I recapped some of the Q&A stuff for you with what they were asked and their answers. I was planning to do more but it was taking forever to type so I just picked out bits and pieces. The recap is mostly Allison Mack stuff so I greatly apologize for the little amount of the others. She did get the most questions though. 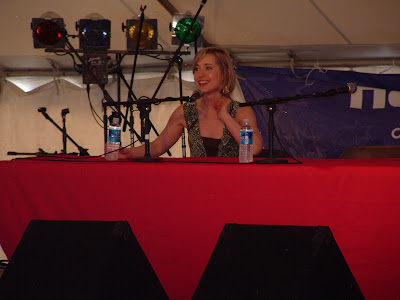 The Q&A session with fans asking the questions.
Allison Mack:
Question: Assuming that next season may be the last season of Smallville, do you know what you're going to be doing beyond that?

Answer: I have no idea. Hopefully making more things. I love what I do and I want to continue doing it. I'm totally inspired by all the actors around me. Once Smallville is done, I'll just be looking for the next job and the next, the next, the next, and just keep making stuff.

Question: Any chance of a Smallville movie? Please.

Answer: I don't think so. We've got the Superman movies out now so I think that takes the place of the story on the big screen and we'll stick to the small.

Question: What is it like to get to act with Tom Welling?

Answer: I get a kink in my neck cause he's so tall. He's about a foot taller than me. Tom is an amazing, amazing man. He's very kind and generous and loving. Working with him is a real joy. He's incredibly creative and tenacious. It's really a pleasure.

Question: Are you as good at hacking computers in real life as you do on Smallville?

Answer: I have a total technophobe. I'm horrible on computers. It is very funny. The fact that I can pass as a computer genius in any way is a miracle.

Question: My favorite scene with you and Clark is the two of you dancing at the high school dance. What is your favorite part with Clark?

Answer: I like when he has to carry me at super speed. (She then reenacted what it was like which was funny). That scene, I pick him up for the prom at the farm. They are always putting me in these super high heels cause he is so much taller than I am and they are asking me to run next to Tom Welling in high heels and usually very tight clothing. This was just another example of super rocky bizarre kind of ground, super high heels, really fitted dress, and then Tom and I. I went to get out of the car and was trying to be all elegant and I was running towards him. It was this beautiful moment and I just fell right into him. He was like "good morning". "Good morning Tom".

Answer: Michael Rosenbaum is a fantastic actor. I've never met anyone that can switch in and out of character as fast as him. He is one of the funniest, goofiest, outrageous, silly men that I've ever met. Yet when you watch him on camera, he is so dead on. So he'll go from literally doing a ridiculous striptease with Christopher Walken impersonations thrown in there to just zooming in and telling you that he's going to take your parents farm and destroy your life. He's incredible. He came to set one day and everyone was feeling a little low and he kind of assumed that the energy was a little raw so he decided to start breakdancing. He wears armani suits and his clothes are really nice on the show. So, he's spinning on his back and doing pullups on the set to try and get everyone going.

Question: When is Alice and Huck coming out?

Answer: Alice and Huck is a short film that I made with some friends of mine and we've been documenting it on my website, AllisonMack.com. It's the first time that I've ever made something from scratch so it's been a cool thing. The film is finished so it's just final touchups and music, stuff like that. We'll be submitting it to film festivals this fall. I'll keep everyone posted on it on the website.

Answer: I'm looking forward to this season as I think we're going to have the opportunity to add some really awesome new characters that we've never seen before. We're going to explore a lot of things that are a little darker than we've ever seen on the show and kind of get away from the kryptonite stuff. I think it will be very exciting.

Question: Will we see more of Chloe's powers in season eight?

Answer: You will definitely see my powers develop in season eight. There are so many questions that have been unanswered as far as what the powers are, how they work, and how I can control them. So, I think you'll start to see me really harness them and understand what exactly I can do and that will be really cool. 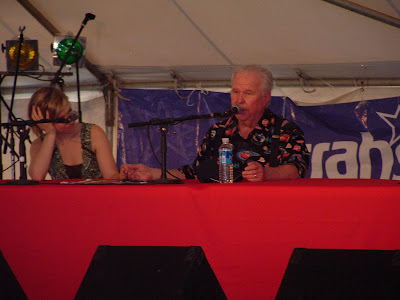 Ned Beatty:
Question: How hard was it to have Loni Anderson as your assistant?

Answer: I had a wonderful love scene, in my mind, to play with Loni Anderson. Then, the dark headed kid named Burt Reynolds blew the whole thing up. (Lots of laughter during this answer. Funny stuff.)

Question: Did you enjoy doing Shooter?

Answer: Yes, a lot of it was shot on a glacier that was north of Vancouver. Danny Glover and I had long, deep conversations about religion because we couldn't figure out why we were up there on that glacier. (laughs). Ned said good things about the script and the movie itself.

Question: What was it like to work with Mark Wahlberg on the set?

Answer: It was good. I saw Mark when we went to see a screening of the movie. People were interviewing us for TV and radio spots. I said that it was like working with another character actor. He was there doing the work. No star business or any of that stuff going on. I looked back and there was Mark who was right behind me. I said "Mark, I really meant that and I hope that you didn't mind me saying that". He said "I've never had anyone say anything that has thrilled me more from another actor". He's a real pro and just works at doing the work. I really admire him. 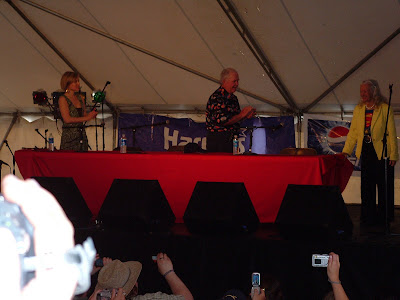 Noel Neill did speak about the statue that is going to be a tribute to her in Metropolis. She had this to say about it: "We saw some of the final things of what the statue is going to look like. Hopefully, they are going to have it next year." I was curious to know about Noel's statue myself cause I was thinking that they were going to do it this year. She has been incredible with going to Metropolis every year for the Celebration and deserves every bit of that statue in her honor. The first lady of Metropolis.

Other random stuff from the Q&A. Allison spoke about Chloe's encounter with Brainiac at the end of season seven and complimented James Marsters on being a great actor. Ned Beatty talked about how he and Allison had discussed when they worked together in a movie when she was eight years old and he said that thankfully he was nice to her. ha ha. Ned has yet to see an episode of Smallville. Ned was asked if he hears the Otis theme in his head to which he replied that he hears a lot of different music in his head with that being one of them. Funny moment when a fan said that they were unable to get tickets for the autograph sessions. They asked if they could meet Allison now and get a hug. She said yes and the fan went up there and got the hug and a picture. The rest of us in the place were thinking "what a lucky jerk". ha ha!!!! It was a fun moment especially when the fan pulled the camera out to get the picture of them as well. Ned Beatty was great and joked around a lot with a lot of answers but also gave very honest answers. Noel was great and she has so much respect from the fans there. Allison was a lot of fun and her personality really shows at these type of things.

Very fun weekend. I met a lot of great people and had a great time. Weather wasn't too awfully bad temperature wise. The storms on Friday definitely put a damper on things for a while as things got rough in the area for a bit. The sun returned today and all was good. There were so many people over there that had incredible costumes and were so nice to let people take pictures of them. Just wanted to recap the Celebration and it was a great time!! Thanks to everyone for the hard work of putting on the event and to Metropolis for hosting all the fans. Thanks to everyone including the actors, writers, artists, and all who took the time out of their schedule to appear to meet the fans. Hoping that they had as much fun as the fans did. Meeting Allison Mack was a real thrill for me and it's going to be tough to top that. Talk to you again on Thursday. Take care and God bless!!
at June 15, 2008