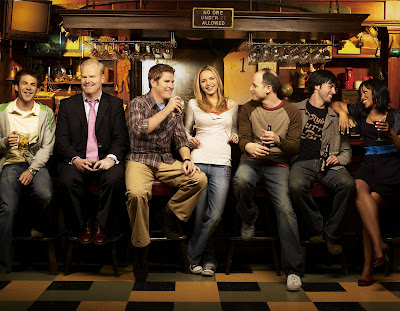 The second season of My Boys premiered tonight on TBS. We got our answer to the question of who did PJ take with her to Italy? She took Bobby for her own reasons but none that she explained to him. She was hoping to act on her romantic feelings for him. Things went bad for her when she couldn't tell him the real reason that she brought him and then Stephanie and Lance broke up leaving Stephanie hanging out with the two of them. The guys back at home struggle with PJ gone and Bobby missing. No one told them that Bobby was going to Italy so they think he was missing. Mike hits on the waitress at Crowley's and sleeps with her. He then doesn't call her which results in her, of course, being furious and she bans the whole group from the place. It really made me think of the How I Met Your Mother episode when Barney was hitting on the waitress and they just kept telling him "dude you're going to kill the bar". ha ha. Anyway, PJ, Bobby, and Stephanie make their way back from Italy. Stephanie feels bad that she probably wrecked any romantic chances between PJ and Bobby. PJ says that it was ok cause she never saw any kind of signs anyway to pursue anything. The group gets back together for poker and PJ pretty much puts Bobby in the friend zone right in front of the group and him so she's stuck in that position now for the time being. PJ got things worked out to get the gang back into Crowley's when she apologizes to the waitress. Funny explanation when she said that the guys don't know how to act when she is gone. ha ha. The group is let back in, well, except Mike. PJ lets him wait out another week when she finds out that he used the McConaughey accent to win over the waitress. Fun episode and I'm ready to see what they do from here with PJ and Bobby.

Want to know my newest addiction? Well, it isn't surprising cause I have been talking about it since I heard about it. I got my beta testing invitation for TheWB.com and I put it through a major test checking out everything. The WB is back. Not on TV but online. The site doesn't fully launch until August but they are currently beta testing it. All you have to do is register and you'll get a login emailed to you. The site has several shows on there but only has about six episodes of each for the moment. They are adding more and more shows as they go but the site is still in the building process as we get closer to the full launch. Shows available to watch on there right now are All Of Us, Buffy The Vampire Slayer, Friends, Gilmore Girls, The OC, One Tree Hill, Smallville, The Wayans Brothers, Blue Water High and Dangerous. Most of the shows have season one episodes up but One Tree Hill has season three episodes posted. Veronica Mars is up on the site as a link but the episodes aren't there yet so they are getting ready to launch it as well with season one. The video quality is amazing. Just like the other sites, you can watch in a small screen or full screen. The quality looks really good in fullscreen. My Friday night last week consisted of me watching shows on the site all night. Funny thing is that I had seen every episode of the shows that I watched before but I was all about watching them again. I rewatched the pilots of Friends, Gilmore Girls, and Smallville with an episode of One Tree Hill thrown in as well from season three. I laughed all the way through Friends and Gilmore Girls as I hadn't seen the pilot episodes of either show in a while. I look forward to them getting more One Tree Hill episodes up on the site cause I already plan on watching all of the episodes that I've missed over the last couple of years. There are features on the stars of the shows and also various games that you can play on the site. The site is also going to tie into Facebook where you can link the two together. They are taking feedback from beta testers on ways to improve the site, what you like and don't like, and any suggestions of stuff to add. I sent in a couple of comments of stuff that I'd like to see added but I'm very happy with what I'm seeing so far. The network that I lived on for so many years is now going to turn into the site that I live on now. ha ha. I seriously see myself spending a LOT of time on this site. I have missed The WB so much and this site is going to be a lot of fun!!

Like I said last week, I've been watching some different shows since the TV season is over to see if I can get hooked on something different. I gave 30 Rock another chance and watched the episode which had Jerry Seinfeld as the guest star. I enjoyed the episode overall. I thought the stuff with Seinfeld was funny. Not really that crazy about the Tracy Jordan character but maybe it is funnier in other episodes. I liked the stuff with Tina Fey's character going through the meltdown of the breakup and buying the wedding dress. I'm going to watch some more and see if I can get into the show.

Heroes will have a Veronica Mars reunion of sorts coming in season three. Francis Capra has been cast to guest star on a few episodes this season. Capra played Weevil on Veronica Mars so seeing him and Kristen Bell together again will be a lot of fun to watch.

I got an email about news on Design Star and wanted to pass it along to the fans of the show. Season three has premiered on HGTV and is airing on Sundays at 8pm central time. The show has nine contestants battling it out in the designing world with the winner getting their own show on the network. For more info on the show, head over to: http://www.hgtv.com/designstar

I ended up watching Friends last night on TBS and the prom episode was on. It's been a while since I've seen this episode but that moment of Rachel realizing what Ross had done for her on the prom videotape is still a great TV moment. Chandler's line of "how many cameras are on you" still makes me laugh every time.

I re-watched the pilot of Roswell on Hulu last week. I really enjoyed watching it again. Roswell was a show that I watched from the first episode and it became a favorite show that I helped fight for with the fan campaigns. I really loved how the first season focused on the love story between Max and Liz. That really was the heart of the show. That first scene in the diner really was such an effective way of setting up the story. After what happens there with Max saving her life, we get to see Max and his group go into panic mode on how to protect their secret. It is such a shame though that so much music has been replaced in the episode. There is music missing in the very first scene. At least, "Crash Into Me" was left in the final scene. Yeah, I see myself re-watching season one. I still say season one was the best season of the show but I thought season two was very enjoyable. Season three just became too much of the Isabel show for my liking.