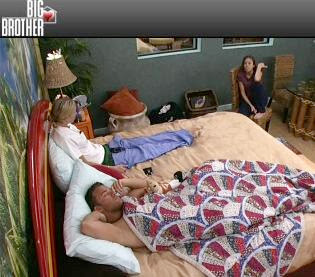 Well, the picture pretty much sums up the last few days. Allison trying everything she can to stay in the house but it was all for nothing. Remember when I said that Amanda stirred stuff up? Well, Amanda has nothing on Allison. That girl has stirred up the house so much that she had no chance when it came to the single eviction tonight. I could never really figure out what her plan was as she lied to everyone in the house while the house this year is like a real life version of the game, telephone. Tonight's live eviction show had the twist revealed. Allison and Ryan were evicted with a 2-0 vote. They weren't able to leave as the door would not open followed by the siren going off. The siren was the unveiling of the latest twist. Julie Chen announced that the couples are no longer playing as two. It is now an individual game and the couples part of the game is over. However, either Ryan or Allison was still going home and the now single competitors would be deciding in a live vote on who would be leaving the house. Allison was sent home on a 6-0 vote. The first individual HOH competition took place and Ryan won it. Ryan goes from being out of the door to now being the HOH. Julie also announced (but not to the houseguests) that an evicted houseguest would soon be returning to the house. Who? Well, that is up to the viewers. Viewers choose from all six evicted houseguests. Vote at this link: http://www.cbs.com/primetime/big_brother_9/contest/vote_back/index_2.php
I'll have more thoughts on the Big Brother week in tomorrow's regular edition of the Wrap Up.
at March 05, 2008