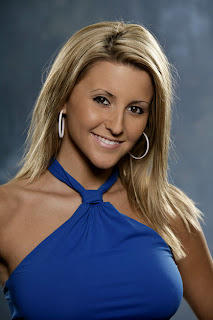 Hey, hope everyone is doing great!!


I've got another Wrap Up Q&A this week and it is with Big Brother 8's Jessica. Jessica was part of the rival twist at the beginning of this season being paired up with Carol. Jessica was a two time head of household winner and made it to the final six before being evicted. Jessica and Eric, who was America's Player, started a romance in the house that has continued on outside of the house. Jessica and Eric were my favorites of the houseguests this season and I cheered for her and Eric all season. So, this was a pleasure to have her answer the questions for the Wrap Up. A huge thank you to Jessica for responding and taking the time to answer!!

I already have heard the answer to this in a recent chat but can you go ahead and answer the first question that everyone wants to know? What is the status with you and Eric?
Eric and I are dating! I am going to NYC this weekend to visit him and he will be coming to Kansas with in a few weeks.