Carrie and Brad Are A Hit Once Again For The CMA Awards In Nashville - November 7, 2013 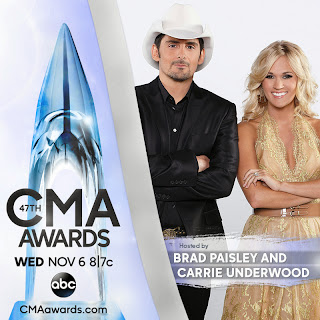 Bridgestone Arena in Nashville, TN once again hosted the CMA Awards last night.  Carrie Underwood and Brad Paisley hosted the show which has become a favorite tradition.  They did not disappoint.  Through the week, there have been a lot of pictures and video posted through Twitter and other social media showing them rehearsing and getting ready for the big show.  That in itself was fun cause you just wonder what those two have planned.  It was a lot of fun and I can't think of a monologue that I sit and wait for more than theirs every year.  From poking fun at celebrity feuds and Obamacare among other things, they were a big hit.  The two of them have such a great chemistry together and their friendship really shows.  You know when you combine these two together for hosting that you are going to get a great effort and a lot of fun!

The awards.  Some surprising and some not surprising.  George Strait winning Entertainer Of The Year was a very awesome ending to the show and very popular among the artists and fans.  The power duo of Miranda Lambert and Blake Shelton continued their reign taking home several awards including Female Vocalist of the Year, Male Vocalist of the Year, and Blake winning Album of the Year.  That was a loaded category for Album of the Year with a lot of great albums in there.  Little Big Town took home Vocal Group of the Year.  Lee Brice's I Drive Your Truck won Song of the Year. Music Video of the Year went to Highway Don't Care with Tim McGraw, Taylor Swift, and Keith Urban.  I absolutely love that song and video.  Florida Georgia Line made noise last night taking home two awards including Single of the Year for Cruise and also Vocal Duo of the Year.
I fully expected Kasey Musgraves to take home New Artist of the Year.  She has had a big year and that album has gotten a lot of positive response.  Taylor Swift was presented with the Pinnacle award last night which recognizes artists who have received national and international prominence through concert performances and record sales.  A very nice surprise with having the singers on stage that helped to launch her as she opened for them on tour several years ago.  I thought that was a nice touch along with the video of congratulations.  She was clearly in awe of the happenings and it was nice watching her just take it all in.

There is a baffling name in there missing from winning an award last night and that is Carrie Underwood.  How does Carrie leave last night without an award?!  I just don't understand it.  The Blown Away era was a huge success and the list of achievements for it are long.  There was a lot of criticism when she was left off of the Entertainer of the Year nominations.  Clearly all of us Carrie fans have not forgotten as that criticism showed back up on Twitter last night.  LOL.  She definitely deserved a nomination in that category.  Not sure what else you have to do to get nominated in that category but I have to think that the Blown Away era achieved that.  Anyway, I just don't understand it.  She had too big of a year to not take away something last night.

On to the performances.  There is a stream right in the middle of the show where it was just performance after performance and I got pulled in loving it.  Some of my favorites were Keith Urban and Miranda Lambert.  I thought they gelled together really well.   I loved Taylor Swift teaming up with Vince Gill and Allison Krauss in an acoustic version of Red.  That was really different.  Lady Antebellum rocked out their new single, Compass.  The Band Perry did the same with their new single, Don't Let Me Be Lonely.  I liked the pairing of Hunter Hayes and Jason Mraz and the interaction through the audience.  Speaking of audience, Brad Paisley did the same during his performance roaming through Bridgestone Arena to finish his performance.  Alan Jackson and George Strait did a great tribute to George Jones which brought down the house.  Carrie Underwood went big with a montage of her four number one singles off the Blown Away album.

The CMA Awards had a big audience last night doing its highest numbers in four years is what I have read this morning.  Lots of people tuned in and it was a fun night.
at November 07, 2013