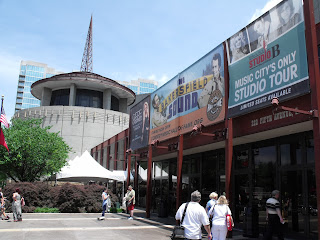 CMA Fest week is underway in Nashville for another year.  Country music fans are coming in from all corners of the globe to check out CMA Fest week.  I have already thankfully gotten to be a part of it and have some fun in the city.  Tuesday was a full day of activity among Carrie Underwood fans for the 2013 Fan Club Party and also the opening of her new Blown Away exhibit at the Country Music Hall of Fame. Fans were abuzz over the news a few months ago that she would be having an exhibit opening up there.  Let me tell you.  The exhibit does not disappoint. 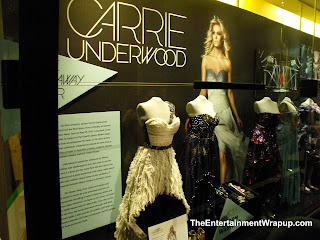 Carrie gave a gift to her fan club this week by letting the members see the exhibit a day before it was opened to the general public.  Each group went in with groups of ten and it was really fun to see.  On display were a lot of her outfits from the tour.  I should also point out that I love how the exhibit was laid out.  It was put in order of the acts of the show so just like in concert, you saw it right from the beginning.  With each outfit was a picture of her wearing it.  It wasn't just outfits though that you were seeing as there was all sorts of things to see such as mics that were used, jewelry, drum kit, and more.  There were also a lot of huge size pictures taken at various concerts from over the run of the tour which looked great.  The end of the exhibit features a thank you to the fans. Signs that fans had at shows and were kept.  Gifts that she was given as well.  Also, there is a thank you note from her to the fans for coming out and seeing the sold out Blown Away tour.  The exhibit is a lot of fun.  I have been to the Country Music Hall of Fame twice now and I highly recommend it.  Very friendly staff and it is just a beautiful building.  The Carrie Underwood Blown Away exhibit runs from June 5-November 10, 2013.  Go check it out! To find out more on the Country Music Hall of Fame, go to their website at countrymusichalloffame.org