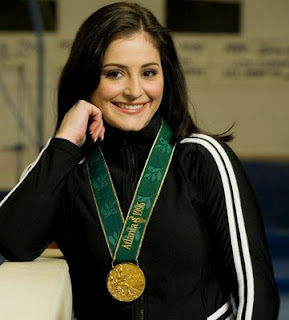 1996 Olympic gold medalist, Dominique Moceanu is set to release a new autobiography this summer. Dominique was a member of the incredible Magnificent Seven women's gymnastics team that won gold in 1996 in Atlanta. Dominique has a very storied career in the world of gymnastics whether it is team or individual. Here is the official write up preview for her book.
"An unflinchingly honest memoir from Olympic gold medalist Dominique Moceanu that reveals the often dark underbelly of Olympic gymnastics as only an insider can—and the secrets she learned about the past that nearly tore apart her family.At fourteen years old, Dominique Moceanu was the youngest member of the 1996 U.S. Women’s Olympic Gymnastic team, the first and only American women’s team to take gold at the Olympics. Her pixie-like appearance, passion for the sport, and ferocious competitive drive quickly earned her the status of media darling. But behind the fame, the flawless floor routines, and the million-dollar smile, her life was a series of challenges and hardships.

From her stubborn father and long-suffering mother, to her acclaimed Svengali-like coach, Bela Karolyi, Off Balance reveals how each of the dominating characters contributed to Moceanu’s rise to the top. Here, Moceanu finally shares the haunting stories of competition, her years of hiding injuries and pain out of fear of retribution from her coaches, and how she hit rock bottom after being publicly scorned by her father.

But medals, murder plots, drugs, and daring escapes aside (all of which figure into Moceanu’s incredible journey), the most unique aspect of her life is the family secret that Moceanu discovers, opening a new and unexpected chapter in her adult life, just as she reclaims the love of the sport that had defined so much of her life.

A multilayered memoir that transcends the world of gymnastics and sport, Off Balance will touch anyone who has ever dared to dream of a better life.

I am really looking forward to reading this book. Off Balance will be released in June and that is just in time for this year's summer Olympics. Dominique was great to do a Q&A for this website back in August of 2008. If you want to check out the Wrap Up Q&A with Dominique, click here. For more info and ordering information on the book, head over to Dominique's official website at: http://www.dominique-moceanu.com/