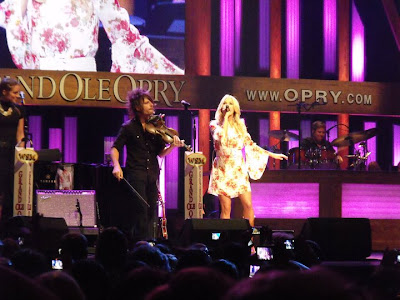 Business is back to normal for the combination of CMA Week and The Grand Ole Opry. Last year, the Opry events were moved to other locations due to the terrible flooding in Nashville. After a major effort, the Opry reopened months later. This year, CMA Week and the Opry house are one again. Tuesday, June 7 was a kickoff day for CMA Week at the Opry and I was happy to be in attendance.

This was my first visit to actually the Grand Ole Opry house. I went last year during CMA Week for the same events that I attended this year but they were moved to the Municipal Auditorium due to the flooding. I was excited to check it out and was not disappointed. I really enjoyed my day at the Opry. The inside is just amazing. Just feels so comfortable. After the morning events, I enjoyed the atmosphere outside the Opry. Just a really relaxing area to just sit outside and enjoy the weather. The day started out with the Carrie Underwood Fan Club Party which I attended. Great way to start the morning out. Carrie got right into singing and sang songs that were voted on by fan club members. She performed a good variety of songs including many that she doesn't perform live as much. She did a Q&A of questions from fans which was hosted by Storme Warren of GAC. This was a lot of fun. Carrie's great personality really shows through during these Q&A sessions. After that, a new Fan Club game debuted which was a play off of the Family Feud. Fans would compete with the winner getting a grand prize of trip of being flown to a concert along with meet and greet passes. Some other notes from the Fan Club party. There were several tour outfits out in the front of the Opry that you could check out along with pictures of Carrie wearing them. Outside was the blue truck from the Play On tour which had many fans getting their picture taken with it. Carrie's husband and Nashville Predators star, Mike Fisher, was there as well. He gave a wave to the crowd from the back of the stage. Great way to kick off the day's events.

That moves us on to the next Opry event and that was the Grand Ole Opry show for the night. This was a great show from top to bottom. I absolutely loved it. Carrie performed to close the night out for the 7:00 show. She brought the house down with her rendition of "Jesus Take The Wheel" and going into "How Great Thou Art". The notes that she hits to end it just always send chills through you. I'm a Carrie fan so I was extremely happy to get to see two shows in day from her. Along with the excitement for Carrie, I was excited to see Lady Antebellum. They are one of my favorite groups and I had not seen them live. They rocked the house with three songs including "Our Kind Of Love". Martina McBride got the house praising with her song "Anyway". She just belted it and it sounded awesome. Martina finished with her new single "Teenage Daughters". The Oak Ridge Boys got the crowd up and on their feet singing such classic hits as "Elvira" They joked of the age of the song and it is a song that I remember as a kid. The crowd absolutely ate it up. Darius Rucker was one of the first acts on the stage last night. There were segments taped last night for the Muscular Dystrophy Association Telethon which will air later this year. Darius shared the stage with Abbey Umali who battles muscular dystrophy. The two of them did a great duet and it was just a lot of fun to watch. Jerrod Niemann was a busy man as not only did he perform on the Opry stage last night but also performed an outdoor concert for the fans at 5:00. Fans got a double dose from him. Long time Opry member, Bill Anderson joked about his positioning on the lineup having to be between Lady Antebellum and Carrie Underwood. Just extremely likable and really liked listening to him. Little Jimmy Dickens was the opener for the Opry show and it just isn't the Opry without him on the lineup. Such a fun way to open the show. Songs and jokes from him. Really enjoyed him. I enjoyed everyone as you can see. There was also a surprise moment during the show as Carrie brought out American Idol finalists Scotty McCreery and Lauren Alaina. The fans got up on their feet for that. They will be getting their Opry experience later in the week. I had my favorites obviously going into it but I loved every second of the Opry show. On a side note, the Opry history video that airs before the show that is hosted by Carrie Underwood was amazing to watch. There is such history there and it's great to be a part of it.

What I do with my drive home? Turned on that the Opry radio station and listened to the 9:30 show. Loved every minute of listening to it just as I did with being there live for the 7:00 show. I joke about this being my annual Carrie day. It was a great day of music at the Opry and I loved it. 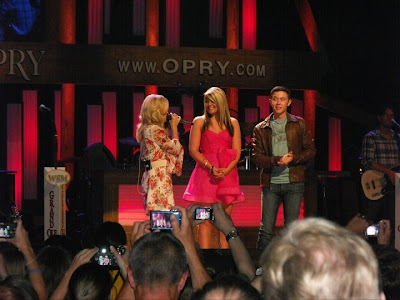 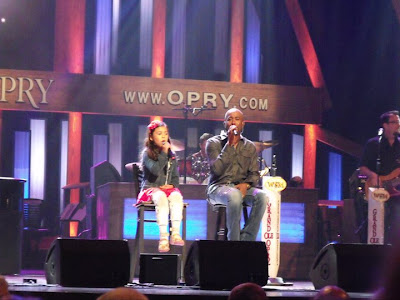 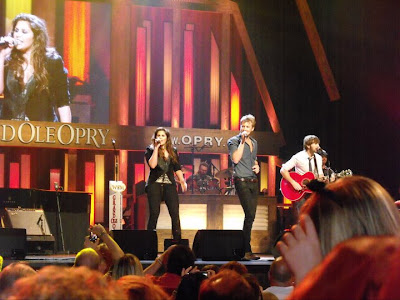