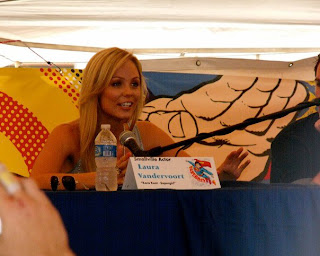 Remember that "no comment" thing from Laura Vandervoort and Sam Witwer at the Superman Celebration about whether they'd return to Smallville for the final season? Well, we can now take Laura off of that list as Entertainment Weekly broke the story last week that Laura will return in at least one episode. Great, great news. Really enjoyed her on Smallville and also now on V. She was a lot of fun at the Superman Celebration and I hope great things keep happening for her.


Unless you're living under a rock, you know that Comic-Con is next week. So exciting!! Plenty of great panels to check out of various shows.

I had gotten behind on a lot of my shows recently and I've been pulling some really enjoyable marathons to get caught up. I'll be posting overall thoughts on some shows in the next little while.

I watched a followup interview with Big Brother 12's first evictee, Annie, this morning. She talked about the stress of doing the saboteur tasks and more of what was her downfall in the game. I also enjoy the true/false game of letting the houseguest try to determine the happenings of the outside world since they've been in the house. Her reactions were funny. The more I see of Annie, the more I want her to still be in the house. Here is the interview video if you want to check it out.

Larry King announced recently that he would be ending his show but would be sticking around with CNN. So, that turns the question to who will replace him? My vote goes for Ryan Seacrest. He's not doing anything, is he? LOL. It would be his 500th job but I think he'd be excellent at it. The reported front runner seems to be Pierce Morgan.

So, The Hills wrapped up with a shot that had everyone talking. They pulled the camera back to reveal a set. Wow, now that is a buzz worthy way to end the show and get people talking. The finale did very well ratings wise.

If you follow any of the stars of One Tree Hill on Twitter, you know it is no secret that season eight has begun filming. I really love One Tree Hill and it is one of the most fan friendly shows that I've seen. The cast and crew really go out of their way to give back to the fans. If you want to follow some of the cast of One Tree Hill on Twitter, here are some of the account names that I know of: @RealOneTreeHill, @SophiaBush, @kramergirl, @AUS10NICHOLS, @DanneelHarris, and @allisonmunn.

Carrie Underwood has been added to the Grand Ole Opry lineup for July 27. The Opry will take place at the Ryman Auditorium that night. Others on the lineup include Eric Church, Steel Magnolia, Diamond Rio, Rhonda Vincent, Jimmy Dickens, and more. Congrats to Carrie on the recent wedding and praying for all the best to her and her husband!!

How lucky do you feel with winning the lottery? The HBO Documentary Film Summer Series is going to examine how people feel about what it takes to overcome the odds of becoming a lottery winner. It also takes a look at the after effects of what happens with the lottery winners and how their lives are effected along with the lives of people around them. The movie entitled, Lucky, premieres on Monday, July 19th at 8pm central time on HBO. For more info, here is a link to check out: http://www.hbo.com/documentaries/lucky