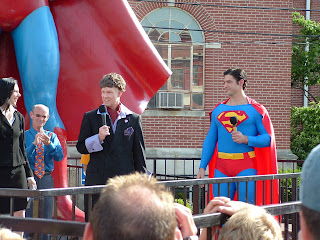 The 2009 Superman Celebration is underway in Metropolis, IL. The opening ceremonies were this evening along with the groundbreaking for the Noel Neill statue. At the opening ceremonies, we had a very fun sketch acted out by people playing Superman, Lex Luthor, and Lois Lane along with others. It was a really fun way to kick off the Celebration. After that, we had the presentation of the Guiness Book Of World Records award that was set last year at the 2008 Celebration for most people dressed as Superman in one location. 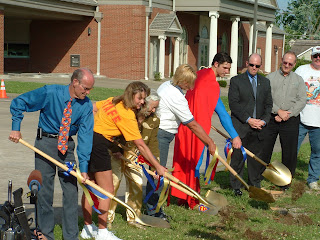 After the opening ceremonies, it was time for a very special ceremony for the first lady of Metropolis, Noel Neill. The long awaited statue that will be made in her honor had its groundbreaking this evening. Noel Neill took part in the ceremony and spoke to the crowd. She was driven up to the location of the statue in a classic car which was a very nice touch. She spoke to the crowd and it was just great to see her take part in this ceremony. I’m really excited to see this statue get done. Such a great honor for her!! This was just the first night of the Superman Celebration. The other guests will be rolling into town for the weekend. A major Smallville presence as the lineup includes Justin Hartley, who plays Green Arrow; and also Phil Morris who guest stars as The Martian. Also in attendance are, of course, Noel Neill (the first lady of Metropolis and played Lois Lane on the Adventures of Superman) and then Beverly Washburn (played on Superman and the Mole Men). Plenty more Superman Celebration coverage to come.  For more info on the 2009 Superman Celebration, head over to:  http://supermancelebration.net/
at June 11, 2009